Home Events The Magic Is Back: Lightning In A Bottle Recap 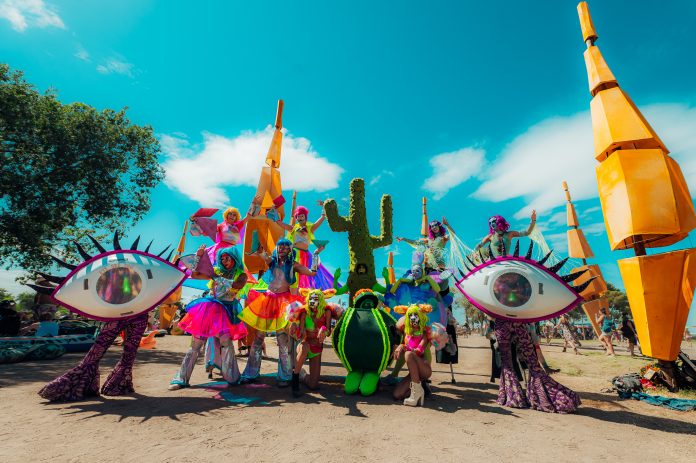 As we fall back into festival mode in full swing – and finally find ourselves recovered from attending this one, we’re here to say that the return of California-born festival Lightning in a Bottle was quite the success. It had a variety of musical acts, creative projects, yoga and meditation practices, as well as some dank dumplings (Dump City for the win). The festival, put on every year by The DoLaB, takes place at Lake Buena Vista outside of Bakersfield, California. The gates open on Wednesday and go all the way through Memorial Day. Beyond the fantastic musical lineup, this place has the feel of a festival that welcomes all – a gathering of adults and children alike, teenagers and babies, yogis and foodies, dancers and producers. This is the kind of festival where lost phones are returned to their owners, and bags may be left unattended. It’s good vibes abound.

A Dust Bowl of Desert Weather

The weather for this year’s event started off hot, and got progressively cooler as the weekend went on (what a relief!). It was always warm enough during the day for a dip in the lake, which also offered a good place to sponge oneself off with a bandana in-between sets (which was particularly handy when the dancefloor became dusty). The evening temperatures were perfect for all-night dancing, and it was only on Sunday evening that we felt a jacket was really necessary.

Some interesting desert elements that one should prepare oneself for: we had a little kangaroo rat that lived in our campsite with us. They look like little kangaroos and hop around, so we were careful to make sure we kept our food in sealed tubs. There were also ground squirrels who liked to dig holes, so the festival grounds were full of little holes to twist an ankle in. The grounds were also very uneven, so walking with awareness was key. The desert is also host to a variety of insects. Keeping your tent zipped up is always a must. In one of the porto-potties, I saw the biggest black widow spider I had ever seen. She didn’t hurt anyone, but she was definitely a factor of consideration.

Another unexpected element of camping in the desert were the dust devils. These are like mini-tornados that can bluster unannounced through the campsites. Our group was one of the lucky ones, but on both Friday and Saturday morning, we saw tornados rip through the camping lots. Pop-ups and tents were flipped and knocked over. But besides the uncontrollable elements of mother nature, the festival was quite seamless.

Getting in to the festival was a breeze. There were enough access points and food options that lines didn’t really build up. The music was ample and varied; and with so many other options available for classes, experiences, and tastings, niche groups could find themselves coalescing with those who share similar interests.

There were stages of all kinds of energy: be it western themed with cowboys, swinging doors, and luscious pickles. Or ultraviolet with bright orange martians, yellow-green umbrellas, and neon couches. There was the “Woogie” stage that felt like a giant glowing mushroom forest. And a zen’d out teepee stage with a wrap around view of the water, and amber lights that had a calming peaceful aesthetic. Little art cars, would scoot about (pineapples, willow-trees, and ice cream trucks), each with their own energy where little parties would manifest, and people could hop on and off. And the main stages of Lightning and Thunder stages had cutting edge technology and very very good sound.

The Magic of The Musical Moment

At Lightning in a Bottle, there is so much great music going on that it is impossible to do it all. Running around does you no good either in the desert heat. And the bandwidth for phones reaches its breaking point with thousands of people attempting to communicate. You may as well drop in and enjoy where you are.

Such moments occurred when the need to move settled. Evan Hatfield is an FKJ style sitarist and saxophonist who set up his whole rig on the beach near the Junkyard stage. I had wandered there because of a Michael Jackson remix that always makes me dance. And suddenly, there were hundreds of people all around us, dancing to this wild set by this dude rocking out on the sitar with a massive sound mixing board. You could literally stand right next to him and watch him go.

Another time, I walked over toward the Crossroads tent to meditate. Coming out of the meditation, I began to dance to this group called Sukira. As I danced, their music picked up and changed. It got more energetic and more people joined in. It turns out they were doing a sound check and were feeding off and giving back to the dancers in the tent. They weren’t scheduled for hours but took the moment to play for us. What a gift: Lightning caught.

Don’t Sleep On These: Acts You Ought to Know

Lightning in a Bottle is a festival that shies away from the mainstream – and has truly played a role in being a catalyst for many moving from mainstream events into more of the world of boutique, eclectic, this-is-not-Coachella events. It is known for bringing in experimental sounds that are a little ahead of the wave of what is popular, and this year proved that even further. Some other great acts that are absolutely worth noting include Yotto, Four Tet, Monolink, Glass Animals, and The Librarian. CloZee and Griz both had killer closing sets for Saturday and Sunday nights – and the three-way b2b2b with Patricio, Marques Wyatt, and Monolink to finish out the Junkyard on Sunday evening was magical. The energy was palpable to the far reaches of the campgrounds.

& a note from our Editor in Chief, Torie:

This was the first year I had returned to LiB at the new venue – I was a long-time LiB attendee when it was in Bradley, and testing the waters of the new space was an intriguing endeavor. Though I wasn’t sure what to expect, I was excited to see music that had changed my life over the years on such an impresssive lineup. The most impactful set was none other than Four Tet – though Maya Jane Coles comes in at a close second.

Four Tet did that damn thing that he always does so well, bouncing back and forth across genres in a flawless way that left me so floored by the end of it. The movement from classic gems to bass tracks (shoutout to the Saka track he played) to drum-and-bass to… well, a little bit of everything, was just the chef’s kiss touch to the weekend.

He closed with his newest track, one I’ve heard and played more times than I’m willing to admit, that gave me all of the goosebumps: “Looking At Your Pager”, released under his KH alias (and available on Bandcamp here).

One of the most incredible parts of the weekend was seeing so many incredible up-and-coming artists on the smaller stages – the Junkyard and the Stacks. A few of my personal favorites included performances at the Stacks from artists like Saka, Fly, Beat Kitty, and a surprise b2b set from Player Dave and Connor Q, and quite a few incredibly beautiful sets at the Junkyard from Rachel Torro, Patricio, and the hidden gem that is Sunshine Jones.

I’d like to take a particular moment to highlight Sunshine. He played the last set at the Junkyard on Saturday evening and rather than playing on the art car itself, he set up a table to the left of the decks – the most renegadey-feeling renegade at 3am I’ve felt in a long time.

If you’re not familiar with Sunshine Jones, you should be.

As the previous DJ finished out his last track, you’d find yourself looking to the left of the stage – truly a renegade at the renegade – following the sound of Sunshine matching the beat with his live setup. It was the most flawless movement into something magical – and this set was one for the books.

A Weekend We Won’t Forget

But how does one catch lightning in a bottle? It’s an old expression that has connotations of being at the right place at the right time. But aren’t we all just creating and contributing to these moments that become great? The next time you think you need to be somewhere with someone to catch that moment, remember that it’s always been in you all along.

We look forward to seeing LiB continue to grow, and we’ll definitely be on the dancefloor at their 20-year anniversary event in 2023.