It never fails that DJ Mag gets annually criticized when they release their Top 100 DJs for the year. As a response to the backlash, they’ve decided to release an Alternative Top 100 DJs. Beatport is co-representing the poll for the first time.

This Top 100 DJs list features sales trend data along with votes, rather than relying strictly votes from fans. They believe this is a better way to recognize the top producers in the scene right now.

Topping the list is none other than Carl Cox. He has been apart of dance music for as long as anyone can remember. Second on the list is Claptone. Rounding out the top five is Richie Hawtin, Adam Beyer, and Marco Carola. It is important to note that all 5 of these producers were rated #50 and over in the first DJ Mag release.

Other notable names in the top 100: Solomun at #6, CamelPhat featured at #19, and FISHER, who didn’t even make the list the first time, came in at #25. Martin Garrix did not make the top 100 of the alternative list, even though he was #1 in the original DJ Mag Top 100.

DJ Mag has long been criticized for their Top 100 list standing mostly as a popularity contest. This list better reflects EDM as a whole and the direction in which it’s heading. Techno has been on the rise for years now and is much better represented in this list. Both house and techno fans should rejoice at this new list.

Check out the official results of the 2018 DJ Mag Alternative Top 100 DJs below. 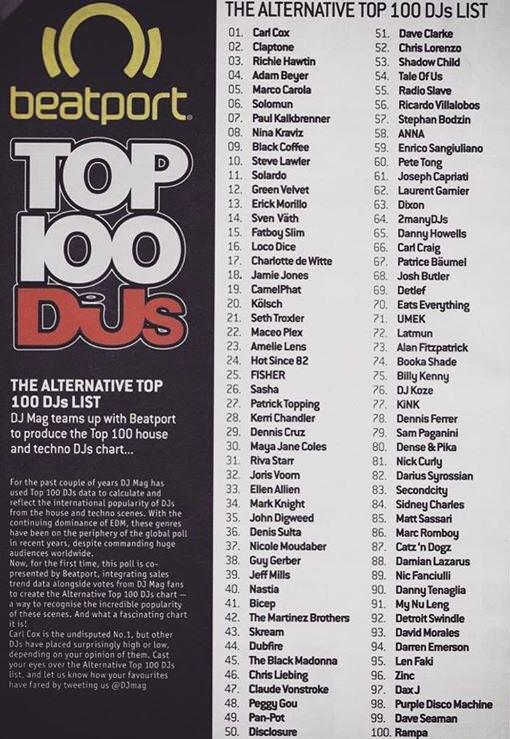