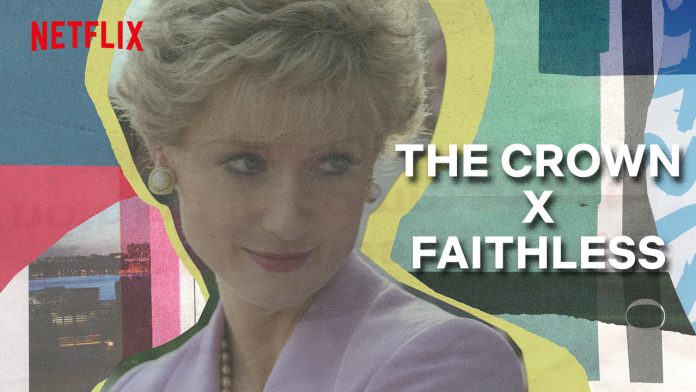 As The Crown returns to Netflix for its fifth season, now following the events that unfolded in the 90’s, the show has enlisted the help of 90’s icon Faithless to remix Hans Zimmer’s iconic theme. To accompany the track, video producer Alice Isaac has created a music video featuring iconic 90s imagery in her signature style of collage and animation.

The 90s signified a huge turning point for sentiments surrounding the Royal Family. From scandal to defiance, the 90s were iconic, carrying a rebel spirit with Princess Diana as its leading lady. At the same time, the hypnotic beats and hedonistic culture of electronic music had burst onto the scene, injecting a level of abandon and intensity across the country. From warehouses to abandoned factories, car parks and airfields, the counter culture’s energy was spreading just as fast as the scandals that surrounded the story of the Royals.

The 90s were revolutionary across the board – whether royal or rebel. So who better to enlist to embody this pivotal era than the pioneers that were often central to the sound of this revolutionary time: Faithless.

‘I could hear in my head how this mix could work around Hans Zimmer’s iconic and dramatic strings. I dug around in the vaults and found lots of sounds and samples we actually saved from the 1990s when we were making our albums. I thought ‘these are genuinely good’, so I loaded them up for this remix of Hans Zimmer’s score. We wanted this to be unapologetically Faithless and use some of the very original sounds that myself and Rollo made together.’

The Crown Season 5 is now streaming on Netflix.