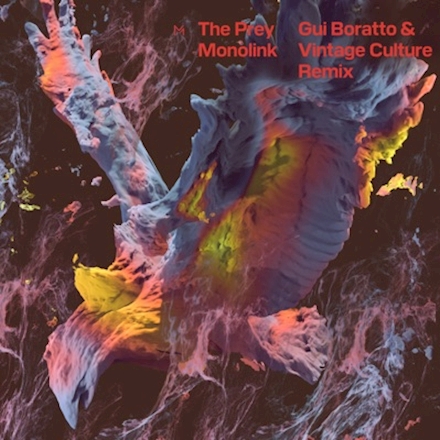 If you’re a Monolink fan, you’ll see that his recent single ‘The Prey‘ got a groovy remix from Brazilian artists Gui Boratto and Vintage Culture. The introspective original is delectable, intricately textured, and rich. We see this remix on Embassy One, Ultra Records, and Sweat It Out. His highly anticipated second studio album comes out June 11th, so mark your calendars.

Both artists showcase their expertise in organic instrumentation and synthesizers. Secondly, it’s a club-ready track so pleasing to the ears, and different that you’ll hit repeat. Perfect for a nighttime drive, the drum pattern moves you while the melancholic vocals beg you to listen. Thirdly, its melody arpeggiates and the guitar-infused bassline is riveting. These two South American producers were a great addition to the remix repertoire.

Lukas Ruiz is the man behind the Vintage Culture moniker, and he’s rising among the ranks in the past five years. He lives and breathes dance music culture, where he’s making a platinum name for himself. With over 1.5 billion streams, he amasses 8 million followers and has been nominated as one of Billboard’s most influential 30 Under 30. Now that’s clout. Joining him on this remix is Gui Boratto, a creative polymath unmatched in his musical influence. He is a pioneer in the art of production and live performance, and you can tell by his musical landscapes.

Moreover, Monolink has taken the time to reflect and find authenticity throughout the quarantine. Under Darkening Skies carries themes of self-preservation and personal awakening. We can’t wait to see what he brings with his nature-laden metaphors. As a titan of melodic techno, we’re certain he will transport us to a higher and deeper level of hearing with it.

Listen to the remix below and pre-save Monolink’s second studio album here.