Chicago-based duo, Flosstradamus, is no stranger to whipping crowds into utter frenzy. With a huge following from their loyal #HDYNATION fan-base, a unique and high-octane take on trap has propelled the twosome to Trap royalty. Their track “Prison Riot” perfectly epitomizes this “turnt up” lifestyle. Taken off their most recent EP, Soundclash, the song features vocals from the permanently crunked Lil Jon, and floods speakers with vigorous synths and ferocious basslines.

In the music video, Dennis Falcon (A bus?!), teaches a seminar called “Learn To Stop Being Terrible”. His speech is layered with Lil Jon’s brash vocals, and urges the lifeless crowd to “act up like a motherf**kin’ prison riot”. The scene quickly escalates to utter chaos, as the track’s earth-shattering drop sends the once motionless crowd into pandemonium. It’s only suiting that a warning sign tattoo makes an appearance, putting the final stamp on this Flosstradamus creation. Purchase the full Soundclash EP here. 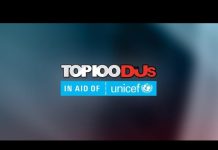