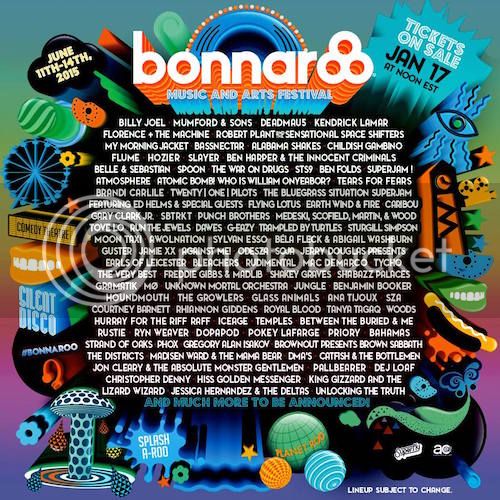 Every year, Bonnaroo’s BLAM, Bonnaroo Lineup Announcement Megathon, is like the Super Bowl of festival lineups, an extended and mammoth online endeavor that slowly reveals the artists to perform one of the most anticipated musical events of the year. Historically announced at the beginning of February, Bonnaroo pulled the trigger early this year, and did not disappoint in the least. From huge electronic music names such as Deadmau5, Bassnectar, Flume, STS9, and Gramatik to legends in the likes of Billy Joel, Ben Folds, and Mumford and Sons, Bonnaroo values an incredibly diverse musical experience, and this year is certainly no different. Though there are an innumerable number of gems to the beloved Roo, the Superjam is a traditional favorite. Led by Skrillex last year and accompanied by Big Gigantic, Zedd on drums, Lauryn Hill, and a potpourri of other artists, the Superjam is an unprecedented jam session for artists in different genres to collaborate and perform a truly one-of-a-kind set. With such huge names mottling the lineup this year, the butterflies in my stomach are already fluttering with excitement to see the performances of Rudimental, Jungle, and Tycho, and the highly anticipated Superjam. Is this a lineup to rival the likes of the festival monster Coachella? We’ll let you decide for yourself, but my vote is for the Roo! Make sure to grab your ticket this Saturday, January 17th, at noon EST and see y’all at the farm!