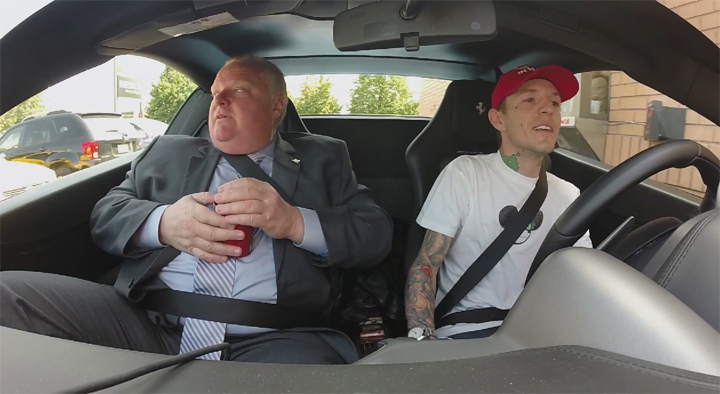 Ladies and gentlemen, the most hyped Coffee Run has finally arrived. Although deadmau5 usually sticks to musicians when taking people out for some good ol’ Tim Hortons, if there is anyone to make an exception for, it is everyone’s favorite mayor, Rob Ford. The last time we saw the infamous politician interact with the world of electronic music, he was struggling to produce a beat at a local fundraiser. On this particular day, Mr. Ford stepped away from the decks and let the Canadian producer, along with his Purrari, do all the work. The two Torontonians discuss some pretty serious political matters like the many potholes of the city’s streets, late night phone calls with constituents and the costs surrounding the upcoming 2015 Pan Am Games. That doesn’t mean the guys didn’t have any fun though, as Toronto’s crazy drivers, deadmau5′ need for speed and Mayor Ford’s ridiculous order of 5 espressos (!!!) provided many laughs throughout the 30 minute video. Their busy schedules might have made it difficult to pull off, but this Coffee Run was well worth the wait and we can only pray that the two will cross paths again.