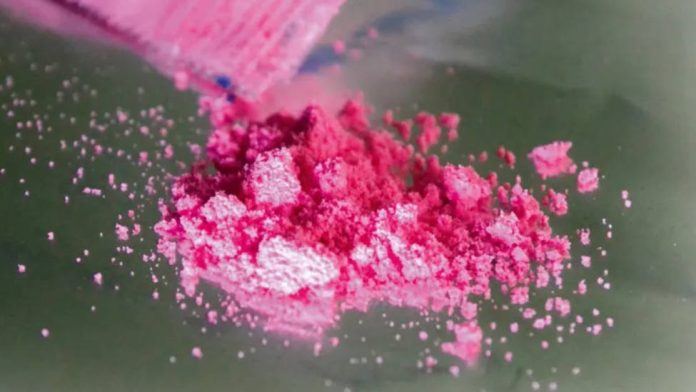 Mixmag dove into Europe’s party scene with an emerging bright pink substance called tusi. From Colombia to Manchester, the newest cocaine comes in pink and is swiftly spreading throughout partygoers in Europe. More common names of the substance include pink champagne, pink tusi, tucibi, 2C-B, or Tussy. With so many names, no one batch is the same but its hue will always make it recognizable.

It is said to be the subject of multiple Spanish drug busts, according to VICE, a recent UN report, and many Reddit threads. Many places have tested it, and known about it, but few know how it came to be. Firstly, tusi originates in Medellín, Colombia. Research chemist Alexander “Sasha” Shulgin first synthesized the synthetic hallucinogen in 1974. It’s said to be a cross between MDMA and LSD. Now, it’s become Medellín’s narcotic weapon of choice for clubbing in the late 2000s. It donned its hot pink glow and flew through the country’s nightlife.

The so-called elite drug had a roller coaster journey of trade. With pipelines in South America blocked, dealers made their own blends in an attempt to mimic its experience. That cocktail consisted of caffeine, ketamine, MDMDA or amphetamines, with a tiny amount of the actual 2C-B. Colombian drug checking organization Échele Cabeza found 95% of product sold to be fake.

Tusi became Spain’s favorite drug eight years ago; its energy is unrivaled. COVID-19 increased its demand in Barcelona. After the pandemic, it expanded to clubbers. The price fluctuated since people learned they could make it themselves. It started around €140-150 or €80 a gram.

“Tusi was everywhere. It was just like any other drug. It depends on the circles you’re in but, in mine, it was a bit of coke and a bit of tusi. It had no head high. It’s got a nice flavour though – it goes up nice.”

This unpredictable mixed drug is a lot of fun but is also dying out. The high cost and secrecy magic made it highly covetable. But now, everyone knows the secret recipe so prices plummeted as well as quality. It’s all about branding. Check out the full article here.