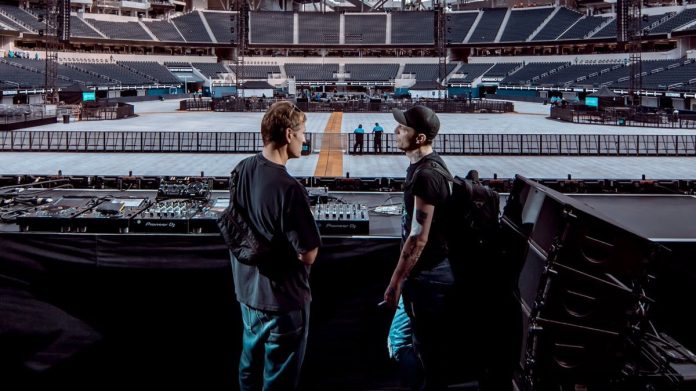 Last summer it was announced that fan favorites Kaskade & Deadmau5 would be coming together for a collaborative project known as Kx5. Earlier this year, we got their first release in the form of ‘Escape‘ which instantly became a fan favorite. Since then, the famed duo has released not just one, but three more singles, for a total of four. Now, they set their sights on their headlining show next month at the Los Angeles Coliseum. To build the hype, they took to Instagram Live for an exclusive interview with the Los Angeles Times, check it out.

Over the course of the thirty-five-minute interview, the conversation covered a multitude of topics. These topics covered everything from their take, or lack thereof on the current event ticketing monopolies, new music, and of course, their upcoming LA show. The interviewer, August Brown of the LA Times, asked many interesting questions. A few of these included topics such as the duo’s take on Beyonce & Drake‘s recent foray into the world of house music, the future of dance music, as well as the upcoming Kx5 album.

Brown: “…so, um, talk a bit about the, the record that you guys have coming out next year. That’s about right time for an album, right?”

Deadmau5: Next year is a good time for an album.

When asking about the state of dance music–

“Have audiences kind of changed at all? Like is the, what’s the kind of, are, are the kids more feral now, or is everyone just sort of exuberant and glad to be back? Like what are the, what’s the mood like out in the crowd these days?”

Kaskade: “Uh, I think last year it was wild. And then I think we’re kind of back to a normal rhythm now. Uh, although I was just in Asia and Asia has only recently just opened up and I’m going back again a little bit. But, uh, yeah, there, there’s still not like rabid stage like it’s happening. We’re together again. Oh my gosh, it’s good. Makes our job really easy.”

A link to the original interview can be found here.

For more information about Kx5’s headlining show at the LOS ANGELES MEMORIAL COLISEUM on DECEMBER 10, 2022, be sure to check out their official website, here. Tickets can be found HERE, see you there!