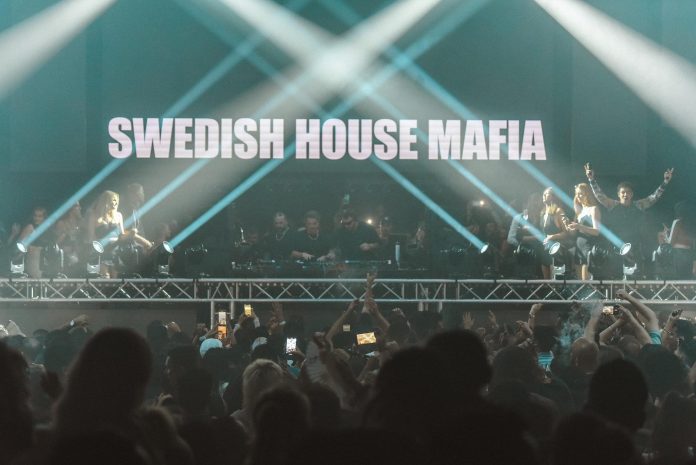 Swedish House Mafia is the quintessential EDM trio. Or at least they used to be. Now, I’m not sure what I would consider them, but one thing is for sure, they are still all about the house music. I recently had the chance to see them not just once, but twice in a single day, and it was honestly one of the best days of my life. While the stadium show in itself was a spectacle I’ll never forget, I finally had the chance to see them in a club setting, in the process crossing something off of my bucket list. Seeing THE Swedish House Mafia in a club setting. I had the chance to do so in one of Los Angeles’ most iconic venues, being baroque-inspired, Avalon Hollywood.

With this being my first time seeing SHM in a club, I couldn’t think of a more perfect venue to experience it in. I say this, as I believe that Avalon mirrors the same trajectory the trio is currently on. You see Avalon opened in January of 1927, in the process forever cementing itself in the golden age of Hollywood. I find this similar to how SHM came up — being that the trio was essential not only to the creation of but also the boom of the golden age of ‘EDM‘. Since their respective ‘golden ages’ both SHM, and A.H. have seen their own unique changes. From soundscapes & genres for the Swedish trio to industries & renovations for the Hollywood nightclub. Having said that, I’m sure you can see where I’m coming from.

In 2008, Avalon underwent a significant million-dollar renovation, to include both brand new lighting and sound systems. They’ve created an aura of extravagance that attendees can not only see, but also hear. This was on full display this past weekend as I saw Swedish House in all of their glory. With a maximum capacity of 1,500, Avalon Hollywood had more than enough room for those of us who came to see the Swedes in action. I’m sure you’ve been to numerous clubs where you were packed like sardines, unable to move, with horrible sound quality, and unbearable heat. At Avalon, I experienced none of these dreaded issues. It is also rated number 49 on DJ Mag Top 100 Clubs, if that is any indication of what the quality they provide.

While yes, the dancefloor was packed, as is expected with an act like Swedish House Mafia, there was ample room in the standing areas, as well as loads of seating spaces in the lobby, as well as the upper viewing area. The last of which had the best-seated cushions for those moments where you just had to take a seat and get away from the dancefloor.

Avalon used to be known as The Jerry Lewis Theatre so it still contains ample seating in the upper portions of the nightclub. The club, within the club known as Bardot was also open, but with this being so far from the action on the main stage there wasn’t too much traffic. It was nice however to know that if you wanted to get away from the strobe lights & lasers, you could. It should be noted that the sound quality there was A-1 as well.

With Avalon being located in the heart of Hollywood, you often get people acting, well Hollywood. This isn’t a bad thing, as it just entails that people are on their best behavior, dressed to impress, and out for some fun. With Swedish House Mafia in town, this was turned up to the max. If you’re familiar with the crowd, and vibe that the Swedes attract I’m sure you know what I mean. If not, just know that the crowd was electrifying, hot, and ready to party.

The venue is located across the street from the famous Capitol Records Building, just north of the Hollywood & Vine intersection. Having said that, it’s just far enough from the main street that you don’t have to deal with the numerous issues that torment Hollywood. It also helps that there is a giant parking lot adjacent to the venue. This makes getting in, and out such a breeze. In a city plagued by parking problems, this is huge.

As amazing as Avalon is, the music was even better. With that being said, I don’t think there is a better venue in town that could have held an event of this magnitude. While yes, some might be able to fit the crowd, in my opinion, Avalon was able to do it comfortably. Most importantly, they got the job done safely. With an act like SHM, where you can’t help but dance your night away, I feel that this is paramount.

If you haven’t had the chance to see Swedish House Mafia yet, I highly encourage that you do. Their Paradise Again tour is currently underway, and still has over half of the remaining shows left. For an idea of what they played, be sure to check out their setlist on 1001Tracklist, here. I’ve gone ahead and linked a crowd video of the event if you want to relive the magic that is Swedish House Mafia for yourself below.

For more information, and future events, be sure to check out Avalon’s official website here, enjoy!

For a recap of their recent soldout Banc Of California Stadium show, click here.

Located in the heart of Hollywood, AVALON is both a historic landmark and a legendary brand within the dance music scene. It has showcased many celebrities and bands on its stage and is now home to nights of various musical genres. Themed events, like Emo Nite, Gasolina & Electric Feels, offer a more social clubbing experience. Meanwhile, Saturday is usually packed out thanks to big EDM and other electronic music acts.

Since its inception in Hollywood over ten years ago, Avalon Hollywood has been a marquee fixture in North America’s dance music landscape. They’ve done this by booking the biggest and best names in clubland. This includes names like Calvin Harris, Swedish House Mafia, Dirty South, Hot Since 82, Fatboy Slim, Eric Prydz, & Pete Tong.

AVALON’s multi-level theatre layout allows for prime viewing from the dancefloor and the upper-balcony seats. The ornate, decorative details of the theatre pay homage to the venue’s history. All the while standing in stark contrast to the hi-tech audio and visual equipment. In the past 12 months, AVALON has installed new overhead trussing and lighting and has also upgraded its soundsystem. The club has also updated its POS system for faster service at the bars.