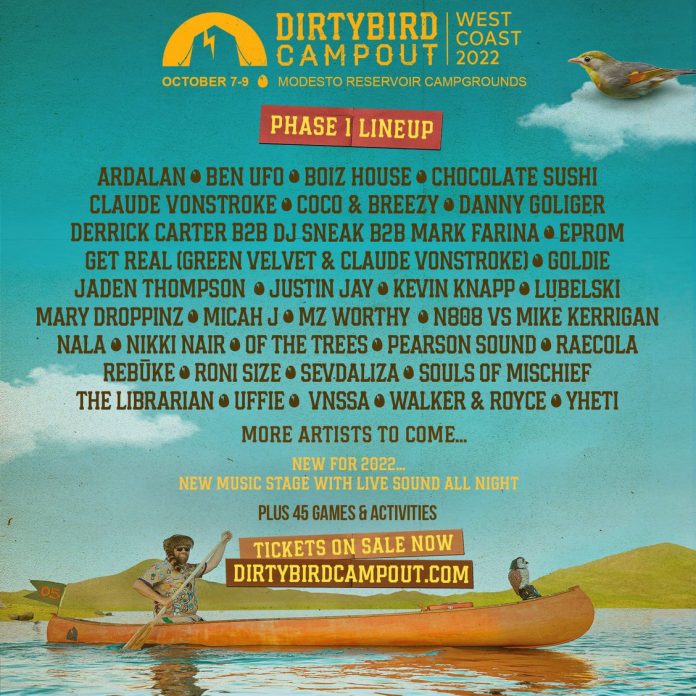 The official phase one lineup for Dirtybird Campout is here. The annual boutique festival, hosted by Claude VonStroke, will return to the Modesto Reservoir Campground in California this October 7th-9th for its eighth edition. The first phase of the lineup includes Ardalan, Claude VonStroke, Get Real (Green Velvet & Claude VonStroke), Justin Jay, Nala, Of The Trees, Rebūke, VNSSA, Walker & Royce, and more with many more artists and surprise guests to be announced.

Dirtybird Campout started eight years ago from the mind of Claude VonStroke who dreamt of an independent music festival that could cut through the mediocrity of corporate raving and foster a community of weirdos and dance heads looking for something more. Flash forward to today and that’s exactly what VonStroke has achieved. Dirtybird campout has become known as “a summer camp for wannabe grownups.” WIth endless games and activities, such as talent and comedy shows, speed dating, dodgeball, tug-o-war, bingo, yoga, and floaty races, and of course a diverse musical roster to keep campers dancing all weekend long, Dirtybird Campout has something for everyone.

In addition to the usual Birdhouse Stage (house and techno) and Bass Lodge (bass, dubstep, hip-hop, etc.), this year’s edition will introduce a third stage called The Hideout. Replacing the old silent disco, fans can expect a special line-up including all night tunes, sunrise sets, and hilarious vibes. Curated by the legendary campout creative director, Blakeshine – this area is the unofficial camp counselors after party. Don’t be surprised if you have to participate in something ridiculous or answer some funny questions to get in the door!

Get tickets to Dirtybird Campout on their website and see you at the campgrounds this Fall!