Home Music News ILLENIUM unites with Sueco and Trippie Redd for the punk anthem of... 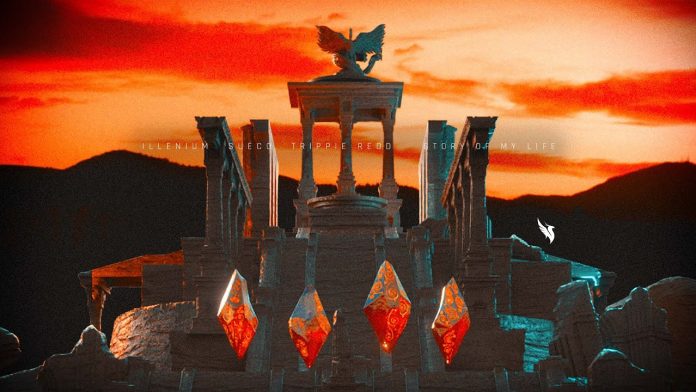 Coming off a stellar year, ILLENIUM releases another rock-infused track. The track has all the traits of any punk-rock anthem: crisp drums, fuzzy guitar chords, and strained vocals that will leave you yearning for more. First debuting at this year’s Goldrush Festival, the track had fans ablaze. Stoking those flames, ILLENIUM brought Sueco out the last night of the DJ’s three-night show at Red Rocks.

Sueco is best known for his single ‘Paralyzed’ which was a viral hit on TikTok . His vocal range pairs well with ILLENIUM’s preference for bass-driven tracks. The bass rifts amplify the peaks of Sueco’s vocal’s punk and emo qualities. Prominent Soundcloud rapper, Trippie Redd, provides the bridge, offering a short but significant moment of reflection into the track. Redd’s slower and airy verse is a perfect counter balance to Sueco and ILLENIUM. The track adds to ILLENIUM’s growing track list of rock collaborations. Previously, ILLENIUM has linked up with Blink-182’s Tom Delonge and Angels and Airwaves on ‘Paper Thin’ as well as nothing, nowhere on ‘Losing Patience.’

This year has been one for the books for the beloved DJ. His latest album Fallen Embers garnered his first Grammy nomination. Additionally, he is fresh off his appearance at Head in the Clouds as well as his own sold-out Trilogy show at Allegiant Stadium. Coming up this weekend, ILLENIUM is set to anchor Ember Shores, his first destination festival. Check out the track below.