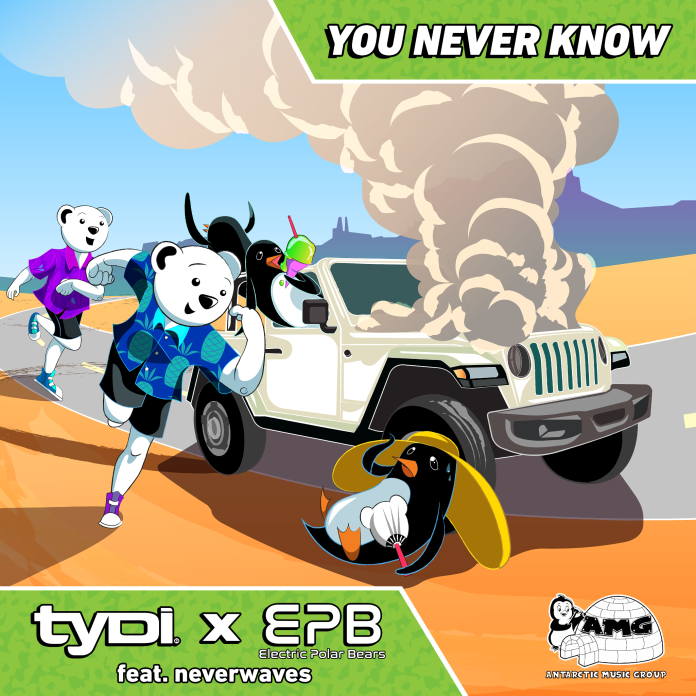 The track starts off quick with neverwaves’ vocals. From here, tyDi & Electric Polar Bears use their productions skills to brings the feels with a hopeful nostalgic tinged vibe that we can’t help but get enough of. The track’s message sings about the synchronicity and chance encounters of meeting “the one.” Vocals aside, ‘You Never Know‘ is a rather mesmerizing track that features a melody that will get stuck in your head for days. In addition to this, it also features some gorgeous synth-work that will make even the staunchest EDM aficionado amazed. If that wasn’t good enough, ‘You Never Know‘ also contains an infectious drop that you’ll want to hear over and over again.

When asked about ‘You Never Know’, tyDi had the following to say:

​​”I’ve been a fan of both the Electric Polar Bears and NeverWaves for a while now, it only made sense to fire up the studio and jump on a fresh song with them!! NeverWaves vocal were the first thing I worked on, we jumped on a zoom session and wrote the story from scratch together; it was the first time we had met! This one is about all of those seemingly ‘random’ coincidental moments where we run into the right person. It’s a pleasant story that isn’t too ‘love focused’, it’s something everyone can jam out to. I can’t wait to drop this one at the festivals!”

With a total runtime of 2 minutes 19 seconds, ‘You Never Know’ is a quick one. With that said, you may want to play it on repeat a few times just to take it in. In conclusion, tyDi & Electric Polar Bears ‘You Never Know’ featuring neverwaves is out via Antarctic Music Group and can be streamed below, enjoy!

Check out the official music video below!