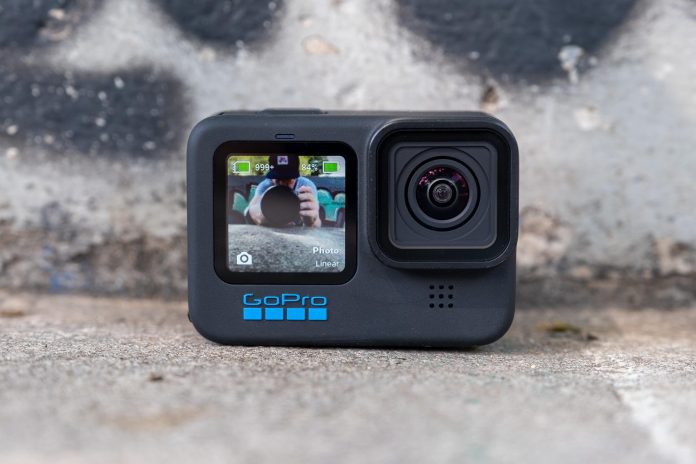 The GoPro Hero10 is out with an iterative update founded by the 9. Right now, it’ll cost you $500 and it looks identical to its predecessor. Some upgrades include a front-facing screen, 5K filming, more battery life, quicker photo, and video capture. Plus, it also has backward compatibility with the Hero9 accessories and 5.3K 60fps and 4K 120fps. It’s even 3% lighter than the 9.

Firstly, with a sleek design and bordered edge, the device has come a long way from its most primitive form. Rimmed with grippy rubber, the 10 gets distinguishable blue labeling on it as well. Separating it from the pack as the milestone model, it comes with two rubber power buttons, mode switching/recording, two screens, and a latching battery. In addition, it also has a USB-C port, microSD card compartment, and removable, scratch-resistant, water-repelling lens covers. Lastly, the GP2 processor makes it faster and is the first upgrade since the Hero6 almost four years ago.

What’s more, is your filming possibilities are endless with the new GoPro Hero10. You can upload footage to your phone or the cloud even faster. Plug it into your phone for 50% faster uploads. Higher frame rates, speed boost, higher resolution screen grabs–you be the director of your film. Take a look at some other added features below.

According to The Verge, it seems like it’s a good upgraded device. Even for the hefty price, the small action camera is powerful. Delivering what could be the most elaborate and clear-cut quality in content, GoPro may continue to push the boundaries on their device. Focusing on their strengths instead of appeasing the masses could give them the edge they need. You can check out the review on the product here.