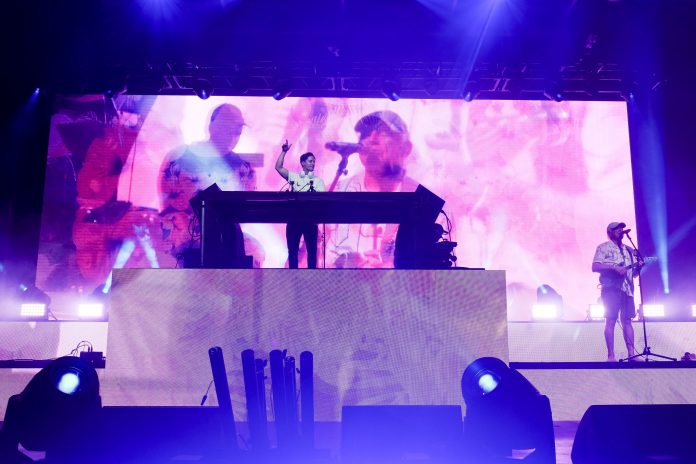 After months of anticipation, Kygo’s Palm Tree Music Festival finally got to rock the Hamptons. It was the first-ever edition of the festival that he wants to take all over the world. The Hamptons of New York were luckily able to experience it first. It took place on Sunday, August 29th at Francis S. Gabreski Airport in Westhampton Beach, NY. It was the perfect venue for a festival. With a grand stage in a wide-open hilly grass field, everyone was ready to get their feet moving.

The festival featured a stellar line-up including Kygo, Zedd, Gryffin, Frank Walker, and Forester. There were also many special guests including Justin Jesso, Parson James, and Zohara. Kygo surprised everyone when during his set when he brought out the iconic Godfather of tropical vibes, Jimmy Buffet. It was a special night to remember and one we all hope will happen again next Summer.

Francis S. Gabreski Airport in Westhampton Beach was a dreamy location for a festival. Sequestered in a landscape of trees, the airport presents a great place to enjoy a day. Every so often private jets would soar away in the background while helicopters would constantly fly in with people. Never once did it actually interfere with the music. The festival was the perfect level of crowded. Just enough to dance the night away with strangers, but not too many where you couldn’t walk around. I found it super easy to leave my dance spot to go get drinks or food and come back to the exact same spot. The bathrooms were also super clean and never had to wait more than a few minutes.

All tickets came with complimentary drinks and alcohol. It was so nice to not have to pull out your wallet unless you were getting food. But even then, some food trucks hooked you up with samples. There were food offerings from New York staples, such as Shake Shack, Ample Hills, Shrimpy’s, Uncle Gussy’s, Milk Bar, and Bravo Toast. There were also drink trucks and stands from Blue Point, Stella Artois, Happy Hour, and Long Drink. Dolce even made personal espresso martinis for everyone.

They had a nice amount of lawn games too. People were enjoying the mini putting green, giant beer pong, flip cup, cornhole, and other fun games. All in all, I would come back to this location in heartbeat for a concert.

While Kygo was the headliner, there was an impressive list of support. The LA-based duo Forester got the festival started with their live hybrid DJ performance. It is always nice to see live singing and guitar playing. They played many hits for the fans including ‘Spark,’ ‘Falling Fire,’ and ‘All My Days.’ Frank Walker was next who brought some energy to Sunday. He played a wide range of tracks including his new remix of Beggin‘ by Madcon. He also lit up the crowd with ‘Like Gold’ and ‘Imagine.’

Gryffin brought his unique sound playing some dubstep bangers for the crowd. He said “let’s get weird” and he surely did! I always love hearing some headbangers even with it being a tropical festival. He also played to the audience making sure to play his mega-hits ‘Feel Good’ and ‘Tie Me Down.’

The last man before the main act was Zedd. Only amazing things to say about his set. He always has a way of working the crowd. He plays his pop-friendly tracks but puts a heavy emphasis on real dance music. The mixture satisfies all leaving us always wanting to see him again. He of course played his #1 hits including ‘The Middle,’ ‘Stay,’ and ‘Clarity.’

The King of Tropical House kept the party going late into the Summer night. With this being his festival, he made sure to send the Hamptons crowd home happy. He brought out a bunch of special guests having Justin Jesso perform a few times. The Norwegian DJ shocked everyone when he brought out Long Island’s favorite Jimmy Buffet. He performed a playful version of ‘Margitaville’ making sure to customize it to the Palm Tree Music festival.

Kygo played all of his classics from ‘Stole the Show’ to ‘It Ain’t Me (with Selena Gomez)’ to ‘Never Let You Go.’ He closed in signature style with ‘Higher Love‘ and a beautiful rendition of ‘Firestone.’ Justin Jesso came out one final time along with 8 violinists. Kygo’s piano was brought out too and everyone sang every word. ‘Firestone’ is a timeless classic that always takes you back to the good days.

It was a fantastic way to close out Summer in New York. I think everyone would love to be back again, dancing under the stars and forgetting about life for a little bit.