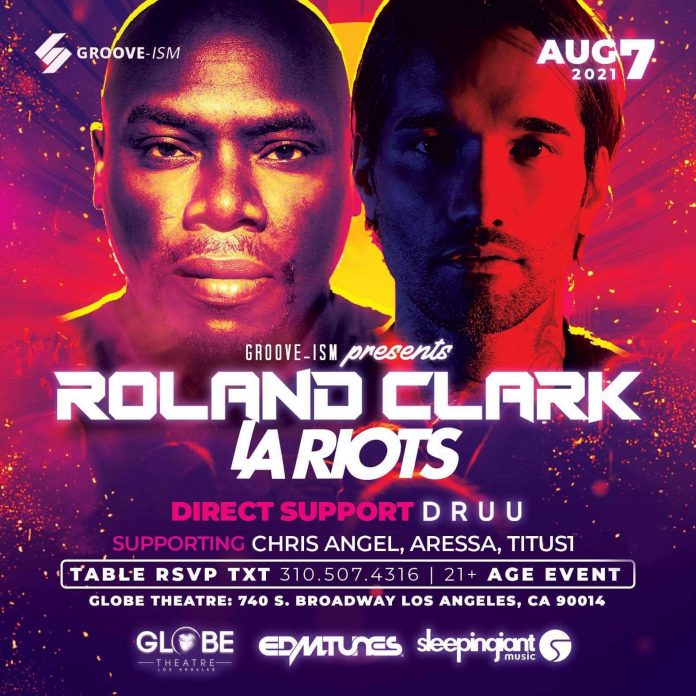 House and Techno collective, GROOVE-ISM, brings you House music legends Roland Clark and LA Riots, with support from Druu, to the iconic Globe Theatre in downtown Los Angeles, California. Here are a few reasons why this is a must see show if you find yourself in downtown LA on August 7th… Grab your ticket here!

Coming off a massive Beatport #1, Roland Clark is powering back into live shows with this headline at the Globe Theater. His recent track ‘Free’ on Catch & Release with Vintage Culture and Fancy Inc is still sitting pretty in the number 1 spot of the Beatport Top10. Roland Clark is a legendary name in the house music community with collaborations other dominating artists like David Penn, Fatboy Slim, Armand Van Helden, Todd Terry. He will most definitely be bringing the heat to LA on August 7th.

On top of that, LA Riots has been an unstoppable force in the Tech House scene this past year. He has released multiple floor-shaking bangers that have been featured in many big name sets throughout the year. One of these releases, is his track ‘I Call that Love‘ with Max Styler that was released on Gorgon City‘s label Realm Records. Furthermore, LA Riots has a new track coming out with Druu on Piero Pirupa’s label NONSTOP Records this August 28th that will be premiered live at the Globe Theatre event.

Built in 1913, The Globe Theatre in Downtown Los Angeles is considered one of the oldest functioning theatre on Broadway. First opened to accommodate full-scale dramatic productions, this historic landmark features 27,000 square foot. While it has undergone various incarnations over the years, the iconic site maintains the grandeur of its Beaux Arts architectural style. In 2013, the theatre underwent a five-year multi-million dollar renovation to introduce a new generation of entertainment to The Globe Theatre. Today, it is a state-of-the-art venue that can be used for any type of special event.

Lastly, we will be going LIVE with this event on EDMTunes Facebook page. Come be part of the magic as we share this event across the globe! Grab your tickets here!