Home Music News Alesso Brings Us Together Again At Skylight Row DTLA For A Series... 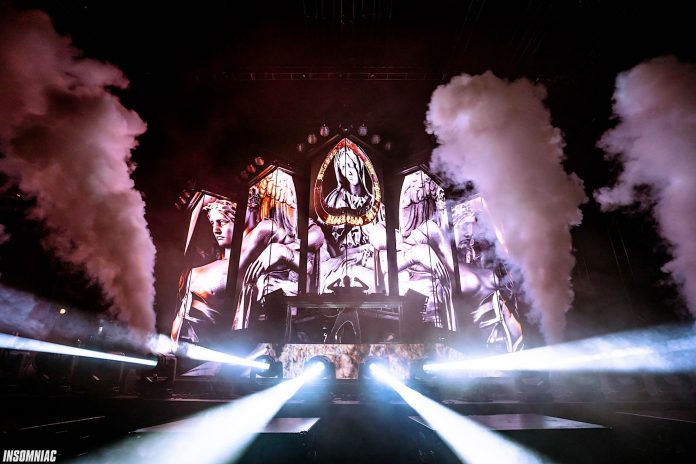 Last week the city of Los Angeles, California came ‘Together Again’, and it was all thanks to the one of our favorite Swedes, Alesso. For two nights, Alesso & friends brought us together again, quite literally. Over the course of two nights, more than 18,000 people came together to celebrate and bask in the music of Alesso & company. Alesso’s ‘Together Again’ was held at the Skylight Row DTLA venue, making it one of the first shows back, at the unique location. Attendees were able to dance the night away with beautiful views of the Los Angeles skyline as the backdrop. If you were in attendance, I’m sure you can attest to how great it was.

The first night consisted of nøll, Kendoll, BlackGummy, and Deorro. As is expected, Alesso had the closing duties. I didn’t get a chance to attend the first night, as I opted instead to attend the second, house-heavy night. Day twos lineup was stacked, and featured some of dance musics biggest names. Kiko Franco opened up the night, who you may know from his hit remix of Shouse‘s ‘Love Tonight’, alongside Vintage Culture. Next up was Anabel Englund, who absolutely smashed the place. Then came a special B2B, courtesy of Westend & Kyle Walker, who are arguably two of the freshest DJ/Producers in the world of tech house. Right before Alesso was Noizu who is on an absolute tear at the moment. If you haven’t gotten the chance to see him, I highly recommend that you do.

Once Noizu wrapped things up, Alesso took the stage to a perfectly warmed up crowd. After a long cinematic intro the music started, much to the crowds appeasement. For ‘Together Again‘ Alesso brought the heat. His set was different, and I mean this in the best way possible. I’ve seen Alesso a slew of times, and its always been happy-go-lucky, festival ready progressive house. This time though, things were much darker, and way more progressive. It was amazing. I’ve listened to Alesso’s fabled Avant Gardner set, and its about the closest thing to his ‘Together Again’ set I’ve ever heard from the Swedish superstar. If you’re curious, you can listen to that here.

Over the course of 2 hours Alesso played all of his biggest, albeit in a different fashion. He played as if he was DJing through a ‘Progresso‘ lens. This makes sense, as this event was named after the tunes from his PROGRESSO Vol. 2 mixtape, ‘Together‘, & ‘Again‘. This mixtape came out a month prior to the shows. It was neat to hear his sing-aong songs with dark, heavy beats under them. The builds and the breaks seemed like something I would expect out of CAMELPHAT, while the drops were 100% Alesso. It was great.

If this is the direction that Alesso is taking his music, then I am all for it. If you get the chance to see him perform soon, you should definitely take it. In the event that he does, I hope its a ‘Together Again-esque’ set. I for one hope he takes this show across the globe. For more information on Alesso, be sure to check out his official website, here. While you’re at it, follow Insomniac as well for the some of the best shows in dance music, here.