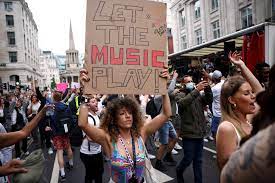 Following a series of festival cancellations and continued nightclub restrictions across the UK, Europeans are getting fed up with COVID-19 lockdown measures. Ultra Europe and Cercle were both just cancelled this week, following the official cancellation of Tomorrowland last week. Additionally, Above & Beyond’s Group Therapy 450 and Anjunadeep Open Air are still in limbo, and many suspect a cancellation is impending.

Since the introduction of the COVID-19 Delta variant, the UK has seen a steady spike in cases, with 22,868 active cases of COVID-19 reported as of yesterday, up 12,235 from seven days before. However, British Prime Minister Boris Johnson remains hopeful, stating he plans to remove all restrictions on July 19th; this follows the postponement of his promise to reopen in June.

For entertainment industry workers who have dealt with venue closures and restrictions for well over a year, Johnson’s promises are not enough. A group called Save Our Scene UK organized a protest last Sunday called #FreedomtoDance, to fight against the continued restrictions of the UK’s nightlife scene, as well as the government’s lack of support for the UK’s nightlife industry. The protest ran for eight hours on the streets of Central London and attracted thousands of music fans and scene figures alike.

A post shared by Save Our Scene UK (@saveoursceneuk)

The protest featured a lineup of several DJs performing across four vans within the march route. DJ’s included Fabio & Grooverider, Alan Fitzpatrick, Eats Everything, and Hannah Wants, to name a few. Protesters could be seen holding signs with phrases like ‘Meet Me at the Club,’ ‘Music Is Freedom,’ and ‘Cut Shapes Not Culture,’ while DJ’s shouted words of encouragement such as, ‘It’s all about celebrating the music.’

Naturally, the protest was was met with criticism. Videos depicted maskless crowds blatantly ignoring social distancing guidelines in a festival-like setting. Many also criticized the protest for its lack of focus, stating it would have been more effective to fight for financial support for the nightlife scene, rather than demanding nightclubs reopen immediately.

Save Our Scene UK combatted the criticism with a statement on Instagram:

Some have been saying, ‘oh they were just wanting a rave…’ Yes! You are right! That’s the whole point. Open up the clubs on the 19th so we can do it safely and responsibly, or you can expect Sunday to be a weekly event. That’s the choice our Government has to make.