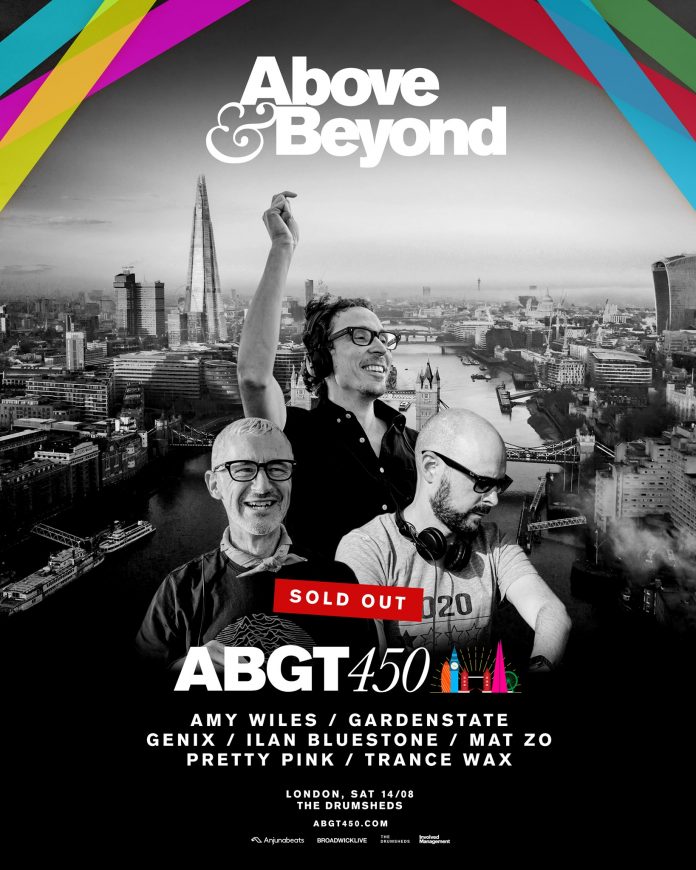 Not even a full day after Tomorrowland was forced to throw in the towel on its late August and Labor Day Weekend festivals, now Above & Beyond’s Group Therapy 450 (ABGT450) is thrown into question. In our article about the Tomorrowland cancelation, we mentioned that rumors were swirling about delays, changes, and cancelations for other European events like ASOT1000, Drumcode Malta, and ABGT450. Now, we are seeing just how accurate those concerns were.

This morning the Group Therapy team announced that ABGT450 and Anjunadeep London had been resecheduled to September. The change was caused due to the venue, The Drumsheds, facing increasing uncertainty in the face of delayed lockdown easing and a lack of guidance from local officials. Basically, the venue has no idea what protocols it would be required to follow even if the shows are technically allowed to go forward. Without any advance planning time, the venue needs to push shows out to give itself time to make plans. While ABGT and Anjunadeep are rescheduled, there are a number of shows, such as HARD London, that are now canceled.

As Europe continues to dither while the USA and other countries open up, we fear this is the beginning of another wave of cancelations. Think twice before you book your flights for any European festivals in 2021.

Following the recent Government announcement we’ve been working on ways in which we can proceed to deliver the upcoming series of shows at The Drumsheds this July & August.

Although our Summer shows fall outside of the ‘Freedom Day’ date (July 19th), there has still been no safety guidance from the Government on what the terms and conditions of entry will need to be in order for shows such as ours to go ahead on the current dates.

The delay in releasing this information makes it impossible for us to plan ahead and make decisions that are needed now in order to meet deadlines for July & August. For that reason, we’ve taken the decision to reschedule the majority of our Summer shows to September.

It’s imperative that we can deliver an unforgettable series of shows this Summer, in order to do so we are working closely with Public Health England and the local authorities. By moving these shows to new dates we’re allowing time to implement the upcoming guidelines as effectively as possible for you.

Unfortunately there were shows that were unable to be rescheduled for September due to artist scheduling and availability and have now been cancelled.

Ticket holders will receive emails from their ticket provider with full details on their existing ticket options, which include existing tickets rolling over to the new dates, credit for future shows at the venue this year, & refunds.

Thank you for your continued patience and support, we look forward to September when we can deliver the best experience yet for our guests.