Tomorrowland officially revealed its first wave of headliners for the upcoming inaugural winter edition. Tomorrowland Winter, first announced in March, will play host to some usual but big name DJs along with a few surprises.

So far Tomorrowland revealed Armin van Buuren, Dimitri Vegas & Like Mike, Martin Garrix, and Steve Aoki. Additionally, we’ll also be treated by the likes of Afrojack, Joris Voorn, NERVO, Lost Frequencies, Kölsch, and Sunnery James & Ryan Marciano. While there’s sure to be many more big name acts to come, its worth noting the absence of any members of Swedish House Mafia who are set to do a comeback tour in 2019. Don’t forget this is only the first headliner announcement, so the lack of Steve Angello on the lineup is actually positive if you’re hoping for SHM.

Its safe to say the Tomorrowland marketing team has done an excellent job hyping up the event thus far. The festival will feature stages at an altitude of over 2000 meters at the legendary Alpe d’Huez, rated one of the best ski resorts in Europe. You can ski to the stages or simply take the elevator with your lift pass if you’re not a skier. When the sun goes down, performances continue on the new and specially designed Tomorrowland Winter Mainstage. 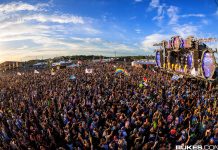