Bob Moses is finally back! The Grammy winning, Vancouver born, live electronic outfit have just released their first new music since their acclaimed 2015 debut album Days Gone By featuring the single “Tearing Me Up.” Today, the duo released their new single “Heaven Only Knows” and announced their upcoming 30-date North American Fall Tour.

Comprised of Tom Howie and Jimmy Vallance, Bob Moses has captivated audiences around the world with their blend of beats tailor made for the dance floor fused with live guitar, improvised synths courtesy of Vallance and sultry vocals delivered by Howie. Fans have been eagerly awaiting new Bob Moses music; the band gave their fans a little something to hold them over with the release of Days Gone By (Never Enough Edition), featuring three live recordings and four remixes, including RAC’s version of “Tearing Me Up,” which earned all involved a Grammy for best remixed recording.

The tour, dubbed the ‘Battle Lines Tour,’ will feature support from Mansionair, and is set to begin in Sacramento, California on September 21st. The tour will make additional Western state stops, and will hit venues in every quadrant of the United States, before concluding back in their adopted home at the Hollywood Palladium in Los Angeles. Tickets to the ‘Battle Lines Tour’ will be available on June 5th, click here to sign up to be alerted as soon as tickets go on sale next week, and check out “Heaven Only Knows” below. 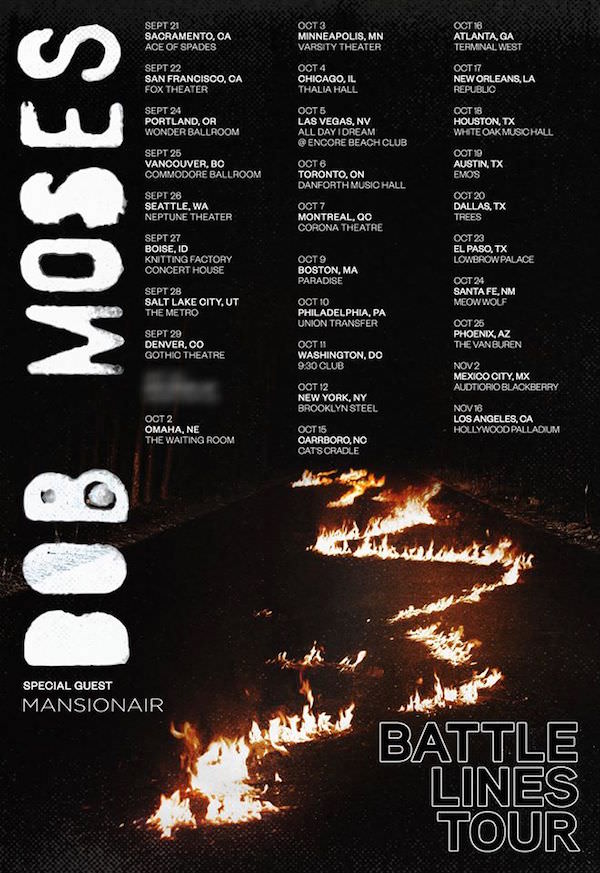