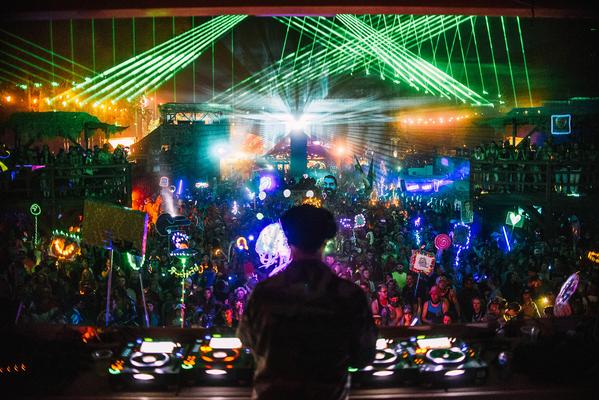 In 111 days, thousands of people will make their way to an evergreen forest nestled in the magnificent mountains of Southern Canada for Shambhala Music Festival. In its 21 year, Shambhala has transformed from a small gathering of 500 people, to a staple of electronic dance music – without losing the core values it established in 1998. Celebrating music, art, and sustainability, the festival is one that previous attendees describe as “the best place on earth.”

With six stages, each managed by their own stage director, you can expect carefully curated talent and production. Recently, the festival announced which talent will be at what stage, and we’ve got the full line up for you.

This year marks the 20th time that the Fractal Forest Stage has been around, originally built on an old-growth tree stump. Boasting funk, glitch hop, and drum ‘n’ bass, you can expect to see Mix Master Mike, Gramatik, Opiuo, The Funk Hunters, Sticky Buds and more.

Team Fractal are proud to celebrate the 20th anniversary of the #FractalForest stage this summer at #Shambhala2018 🌲✨. See you on the farm in August for this cosmic journey. Follow "Shambhala Music Festival" on Spotify to check out the Fractal Forest #Shambhala2018 Playlist! 🎶 pic.twitter.com/ZslABt0PP0

Always showcasing the up-and-comers along with the mad scientists of electronic music, this stage will definitely get weird. You can expect to see Claude VonStroke’s alter ego Barclay Crenshaw play here, along with Liquid Stranger, Mr. Carmack, Space Jesus and more. There will also be a special “1985 Music Showcase” with Alix Perez, Skeptcal, Chimpo and Monty who will transform into professors of drum ‘n’ bass, and grime history.

The Amp Stage is more than proud to present their full lineup for #Shambhala2018. W/ some of the most talented & experimental new producers in the game alongside a selection of fave legendary DJs, they’ve assembled their finest roster of partyrocking, mindbending music to date!🎪 pic.twitter.com/z6Mrkos3OT

Located next to the Salmo River, this stage is the favored daytime spot of many festival-goers, allowing for a relaxing cool-down in the river while listening to live bands, hip hop, and bass. Mark Farina, 29 Palms, Dirtwire, Tyler Stadius and so many more will play the Living Room.

The Living Room Stage is the perfect place to dance by the water. Tropical feels that are sexy, funky by day & cozy, warm by night. Look forward to longer sets from all genres & styles at #Shambhala2018. Soulful, funky, deep, sexy, uplifting, fun. @ShambhalaLR is pure vibes!🏖️ pic.twitter.com/ASLLinbAMR

For five years The Grove has been bringing a diverse mix of musical talent and this year is no different. Leading the line-up is Grammy award-winning Brasstracks, along with CharlestheFirst, Edamame and The Librarian. Grime and dubstep artists D Double E, Kahn & Need and hip-hop producer Clams Casino will be in attendance as well.

The #GroveStage invites you to experience a luscious mixture of music and environment for #Shambhala2018 which marks 5 years for #TheGrove. Dig deep into their 2018 lineup and you will find an array of hidden gems, and an incredible list of Canadian artists on the rise. 🍄🌱 pic.twitter.com/hM4C40DSxD

Your booty will percolate at this stage full of all things bass. Described as a  “supernatural, sci-fi, Tiki town” you can watch from above the dance floor as tree forts connected by bridges surround the stage. Here you will find Boombox Cartel, Snails, DC Breaks, Perkulat0r, ill.Gates, and a DJ set by The Glitch Mob.

.@TheVillageStage is very excited to share their full #Shambhala2018 lineup with you. Look forward to a smorgasbord of tasty beats with everything from #drumandbass & #jungle, to #dubstep, to #grime, and all things #BASS at #Shambhala2018 this summer! 🔊🖤 pic.twitter.com/LAL5R1XOrU

The Pagoda Stage is bringing the freshest in modern dance music to you for #Shambhala2018
Get down with exciting new big room EDM and even funkier breaks, and get ready to feel zen with some of the deepest bass you've ever felt at @ThePagodaStage 🏯 pic.twitter.com/WbAJbBTJNG

Find your tickets for Shambhala here, and get ready for the upcoming festival with these playlists for each stage on Spotify.