Yep, you read that headline right. Dillon Francis, the man whose number of alter-egos and costumes has reached well into the teens, hates Halloween. Dillon, however, has a pretty good reason for not buying into Halloween traditions at his age, but we’ll get to that later. 2017 has been one heck of a year for Dillon Francis, both musically, as well as his deeper dive into his acting career. Apart from the multiple singles, music videos and remixes he has released this year, Dillon has continued his high level social media skit game, as well as taking part in the Vice series What Would Diplo Do?, playing Diplo’s best friend Jasper.

1New Orleans is a special city for a lot of reasons, do you have any fun or interesting stories from playing here in the past?

Yeah actually, the last time I was in New Orleans, I got hit in the face with an RC Cola can and I got stitches here, I haven’t been back since. Fans have already been texting me like yo people are bringing RC Cola tonight. I got hit directly in the face, I was bleeding…Full RC Cola can. Wasn’t even a Coke. Not even a Coke. You know with a Coke they could’ve done something funny where it was like, “share a coke with Dillon!” Still, New Orleans is one of my favorite places because drinking here is so much fun. I didn’t get to do anything today, but last time I was here, I did this rafting thing where you get this little raft next to you and it’s full of beer. I forgot what the name of it is but anyways you’re going down a river and drinking as much as you can, it’s a good time.

Dude, I’m not a big Halloween guy, I’m not a kid anymore, I just turned 30 so I’m really not a kid anymore. I just, I never really got into it, even being a young kid I was only into Halloween for the candy. So now for me I’m like eh. I’d much rather dress up—for example in my music video I dress up in that—but I’d rather do it for something that’s more worthwhile than just doing it for a night of partying.

4So I suspect you’ll have no Halloween related surprises in your set?

Dillon did indeed end up throwing Michael Jackson’s “Thriller” into the mix during his set, closing out the weekend on Voodoo’s dedicated electronic stage Le Plur. He also ran through his most recent selection of releases including his latest singles ‘Say Less‘ featuring G-Eazy and ‘Hello There‘ featuring Yung Pinch, as well as his collaborative remix of ‘Say Less’ with Moksi, and his remix of ‘Real Life‘ by Duke Dumont. As is tradition with Dillon Francis, he kept the energy high throughout, save for a few slower interludes including his now signature mashup of Calvin Harris’ “Slide” and Beyonce’s “Single Ladies.”

5You’ve released several singles and remixes over the last few months in a variety of different genres, but on your most recent single ‘Hello There’ you went back to your Moombahton roots. What are your current thoughts on producing Moombahton versus exploring the other genres that you’ve been producing?

I’ve really honed in a lot with moombahton this year I think, especially because I’m working on an album right now, and a lot of that stuff is in that tempo range, whether it be hip-hop at 110 or 4 on the floor moombahton stuff. I mean, it’s my favorite genre, and working on this album, I’ve re-inspired myself with a lot of the stuff I’ve been doing, so I think that kind of translates (on the album). The song that I had made with Yung Pinch was supposed to be an instrumental for my album, but I loved his vocals so much that we turned it into a single. But, yeah, back in the groove.

6Earlier in your career I read an interview of yours where you discussed how, at the time, there weren’t really any boundaries with moombahton because you were one of the early people exploring that sound, has that changed as your career has progressed?

A little bit, I think it changes with time. Even with trap music, when dance/EDM trap music came out, there wasn’t a sound set yet, now there’s a specific sound set. Even with dubstep, that happened as well. You have to have the snare tuned in a certain way, or if you’re doing a trap song you have to use the Zaytoven snare because it sounds the cleanest and it punches in the mix the most. And now with moombahton, the dembow that’s used in a lot of rheggaeton is now really used in a lot of moombahton. It definitely has its sound set now.

7We hear you are doing a Spanish lyric album, what’s the status of that project?

Finishing it up, I should be showing off some of the music next year. Next year I’m gonna start the whole album cycle.

Adidas for example, whoever seeds out for artists, they kind of just pick and choose who they want to have their clothes. I mean, I’ll gladly take free Adidas any day of the week. But honestly that’s it.

The thing with Teva when they sent me a box, I had originally just done a story about Tevas by myself because I thought that they were really funny. So that’s usually what happens, if I like something I do a video of it, and then the brand will reach out and be like hey we saw your video, and if they’re like minded they’ll be like can we send you more stuff, or can we do a brand partnership. I’ve never done a brand partnership because I don’t think anyone would like to do one with me because the stuff that I make is just so out there. I bet if I told Teva hey here’s this idea I have, we’re gonna call your sandals “fuck machines” they’d be like ehhh well I don’t know. But me doing it on my own, I can (call their sandals fuck machines) and they’ll just send me a bunch of stuff. And I have fun doing it. It’s just for me having fun, and I get lucky to get free shit. 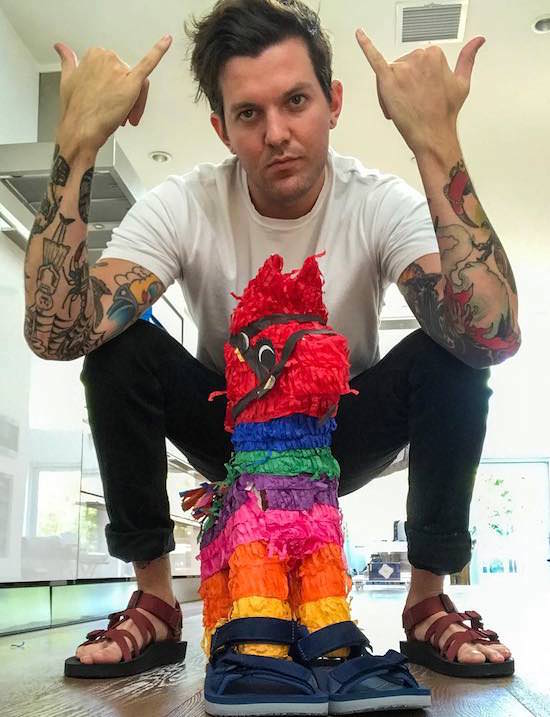 10Awesome man, thanks for taking the time, good luck on your set tonight.

Thank you man, I appreciate it, It’s gonna be fun. It might not be fun. Who knows. We’ll see.

You can check out Dillon Francis’ recent music video for his single “Hello There” with Yung Pinch below, and stream the single on Spotify here.