Home Music News Lollapalooza Day One Evacuated Due to Weather

Headliners Lorde and Muse had just started their sets and were only approximately three songs in when they were asked to leave the stage. Porter Robinson has been on for about half an hour closing out the Perry’s stage when the evacuation occurred.

While the first day of the event had an abrupt and unpleasant end, the four-day Chicago festival will resume today and through the weekend, hopefully without any more issues.  The rest of the weekend will feature an incredibly stacked lineup including Chance the Rapper, The Killers, Arcade Fire, Justice, DJ Snake, Zeds Dead, Kaskade and countless others across eight stages.

Several acts took to social media including Lorde and Muse to express how heartbroken they are and how they will do their best to make up for the short shows, even though it clearly was not their fault. Check out the video of Lorde telling the crowd about the incident  and more below:

The remainder of performances have been canceled. 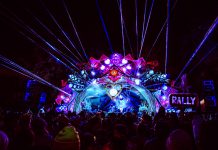