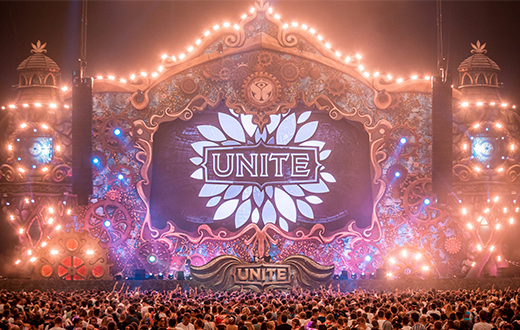 UNITE Spain is an event organized in Spain to livestream Tomorrowland festivities for the locals who can’t make it. Spain joins a growing list of UNITE events which are satellites of Tomorrowland, but organized by local promoters in each country. This year’s UNITE Spain was just evacuated only hours ago when the main stage was partially destroyed in flames. All the 22,000 attendees have left the site and fortunately there is no news of any causalities.

Reportedly, the fire that caused the exodus broke out near the speakers on the main stage. The unfortunate accident happened in the middle of the night and also hours before Steve Aoki was supposed to play.

In response to the accident that could have been disastrous on many levels, the organizers released a statement crediting the blaze on a technical malfunction.

“Thanks to the professional intervention of the authorities all 22.000 visitors were evacuated safely and without reports of injuries.

“Authorities will follow up and continue the investigation with the local Spanish organizer of UNITE.”

The fire that broke out at 10:15 pm local time (9:15 pm GMT), seems to be in the control of the authorities. We hope all you music lovers are safe and well. Watch the video of the fire below.