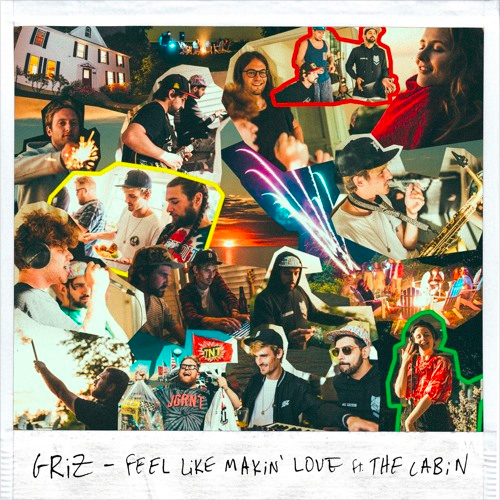 Since expanding his reach and starting his own record label, Grant Kwiecinski (GRiZ) has gathered up quite the team of musicians on his imprint All Good Records. Last summer, he and a group of his closest musician friends rented a cabin for a couple weeks to chill, make music and vibe out. “Feel Like Makin’ Love” featuring The Cabin is one of the songs that resulted from that experience.

Checking out the musical credits below the tune on Soundcloud, you might not instantly recognize all the names credited. You’ll quickly realized that The Cabin is not an artist, but rather a group of artists mostly listed under their real names, a testament to the friendship that has been created between the people behind this music. We know by now that GRiZ is Grant Kwiecinski, Josh Smith is the guitarist of duo Gosh Pith, Jessie Arlen is iDA HAWK, Kevin Donohue is the lead producer, guitarist and keyboardist behind Sunsquabi, Dan Hacker is GRiZ’s wingman and guitarist Muzzy Bearr, and Andrew Clymer is one of the founding members and former bassist of Sunsquabi. GRiZ also received production support from Freddy Todd, Russell Scott (Russ Liquid), and Josh Freed, the second member of Gosh Pith.

You may sometimes hear about your favorite artists embarking on similar experiments as this group of artists did – renting a house in a secluded area with no TV, Internet, cell service etc, and many will say they created the best music of their careers from those experiences. “Feel Like Makin’ Love” is GRiZ’s first known release from his 2016 cabin sessions, and there are likely many more to come in the future. Take a listen to the incredibly vibey “Feel Like Makin’ Love” on Soundcloud below.