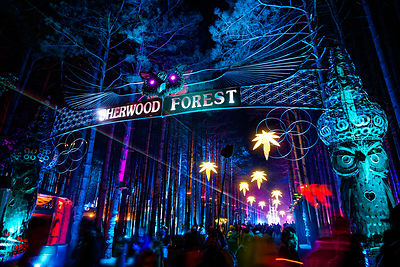 Electric Forest Music Festival will always be my favorite music festival. Everyone should make it a bucket list item to make it to the festival at least once. The forest has developed into something that symbolizes much more than music to the community. Concepts like Her Forest and the Giving Tree add to the internal society that camps throughout the weekend. 2017 was my third forest and second time in the Good Life VIP camping area and it was nothing less than an adventure.

Like Summer Camp Music Festival, we experienced some rain from mother nature but it just added to the fun for some as they dove head first into a puddle as the beat dropped. Weekend 2 was also strapped in for some harsh weather conditions. The general vibe of the forest is beyond positive every year and there’s nothing that can get you down while you’re in Rothbury. The rain has nothing on the forest.

Some acts stuck out like a sore thumb and surprised me. Barclay Crenshaw, Claude von Stroke’s alternative name, blew the roof off of the Observatory early in the week with some experimental music. At Sherwood Court, Big Gigantic played the best set I’ve ever seen from the duo and their newest album showed how much they’ve switched up their style. It’s always good to see artists change things up. Another act that stood out from the crowd on this stage was Troyboi. He’s been blowing up and it shows with the 20,000 plus in attendance for the set. I didn’t know what to expect from him and I was able to walk away thinking this was one of my favorite sets from the past weekend. Please give this man a visit if he’s in your area because he deserves it.

A favorite among most, the Jubilee stage is always a good place to go. This stage is under a giant tent with the stage name lit up in bright yellow lights. A household name in the forest always makes his way to this stage and kills it every time. Even when he wasn’t on the lineup one year, he was able to play a surprise set after an artist dropped out last minute. I’m talking about 12th Planet of course. Being one of the heaviest dubstep artists out there, he blew the roof off the Jubilee tent. If there’s one set I don’t miss in the forest, it’s 12th Planet.

On the same night, FKJ played a set that was beyond the quality you would expect in the forest. He recently debuted his newest album and he continues to hold up the funk with others like GRiZ. This artist is so good at improvising good music that he even sampled the crowd and used it in his set. The talent he orchestrates through his sets is unbelievable. He uses a ton of different instruments and he’s the definition of a one-man band.

Another great act to come out of the Jubilee stage is OPIUO, another favorite from the weekend. He had a surprise guest by the name of Russ Liquid come through and jam out with his iconic trumpet. There’s nothing like watching one of OPIUO’s sets because he throws down heavy beats while keeping the funk to a maximum. Across from this stage was the Hangar, a fun and weird place to find yourself. Space Jesus played an overcrowded set here and it was one of the dubbiest sets to hit the hangar. He played a back to back with Liquid Stranger and both sets were worth visiting.

Some fans felt regret for attending Bassnectar’s first weekend set and missing out on his set the following week. All of his sets have a unique experience and his first set showed more people what he was all about. He dropped the famous Phil Hicks speech that he played at Red Rocks a few years back as well as his new tracks. The funniest part of this experience had to be the goons cooking steak while they wait for Lorin Ashton to walk on stage. There’s no explanation as to how these creatures of the night were able to sneak a grill and meat into the festival grounds but it makes for a funny story.

The infamous Good Life after parties sets have to be mentioned in this post. Although the general festival sets were amazing as usual, the VIP sets were lacking this year. Past years hosted sets from Skrillex, Exmag, Gramatik, Datsik, Diplo b2b What So Not, GRiZ, Louis the Child, Branxx, 12th Planet and others that helped build an incredible reputation for the VIP after parties that went from 2am to sunrise. Management switched the gears this year and folks were not happy. The sets this year only went on until 3 or 4am with only one artist performing each night. I’d like to thank Liquid Stranger for wanting to play longer. He was told to get off at a certain time even though he wanted to continue past 4am. Last year, The Werks played a surprise pre-party set and during that time this year, they were still building the VIP stage. This is something that is worth bringing up because it’s one of the main reasons why people stick out the extra cash for the good life. I know a lot of people appreciate that I’m bringing up this problem and more attention should gravitate towards VIP’s needs for next year. Electric Forest will always be home for me and I love Rothbury but the Good Life needs to be good again.