New York City is one of the best cities for BIG parties during the holidays. Past parties during the holidary season have included: Avicii, Sebastian Ingrosso, Hardwell, Armin van Buuren, Kaskade & many more. Some of the biggest events went down at New York’s Pier 94 & Pier 36. New York’s Big Week NYC 2015 is only a few weeks away and some massive lineups for the holiday week have already been revealed. Dutch traplords, Yellow Claw, will kick off the holiday festivities at Pier 36 with fellow hip-hop superstar, Fetty Wap. The Pier 36 show is a stop on Yellow Claw’s North America “Blood For Mercy” Tour and will bring some friends with them to join the festivities in NYC. LA’s Slander, dubstep pioneer 12th Planet, bass house innovators MOKSI and fellow dutch trap DJ/producers LNY TNZ are all set to tear the Pier’s roof off.

New York’s RPM Presents  have the right idea with their lineups for the upcoming Big Week NYC, as they incorporated some incredibly diverse group of artists. Being in NYC, they brought some of the biggest names in hip-hop today, as Future and New York’s own Travi$ Scott are joining in the fun as well to bring a beautiful blend of hip-hop and dance music.

Make sure to grab your tickets for the “opening act” of New York’s Big Week NYC 2015” as it may well be act of the entire show. Join me as we will rage the night away with Yellow Claw, Fetty Wap & company on the 26th of December and buy your tickets here! 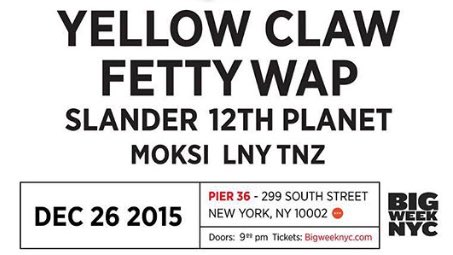