Panama City Beach, Florida, is not for the faint of heart. People who venture up there to vacation, celebrate spring break, or in this case, check out a music festival, only want to do one thing: rage on the beach. Spring Weekend is penned as the largest collegiate music festival in the country, and there is no doubt about that. As you make your way around the grounds that consist of hotels along a beach with two stages on opposite ends, it’s obvious that everyone in attendance is representing a school.

While Spring Weekend isn’t a new event, this year promised to be the best in terms of production and quality. This was my first year attending SW and the lineup looked promising enough. With Krewella and Bassjackers headlining the first day (Friday) and Arty and Kill the Noise closing out day 2 (Saturday), from what I had gathered from previous years, the lineup only got bigger with age.

Even though the official Spring Weekend festival was two days long, the kick off was the night before in Tallahassee at Coliseum with a special “Journey to the Beach” show featuring GTA and Ricky Remedy. The young Remedy, while still a little bit new to the scene, has garnered massive support from Mad Decent artists, such as Flosstradamus. GTA delivered, as usual, their trap sound that we have come to know and once the show was over, it was time to make our way through the time zone, lose an hour, and wake up in the sunshine.

Thankfully, and I recommend this for attendees in the future, we checked in at 5 a.m. to the hotel in order to avoid the mad rush that ensued when everyone started piling into the area. The event times were as followed: 12 p.m. to 5 p.m. was devoted to the mega day stage, and after an hour break (to eat, nap or just keep the party going in the hotel rooms), the night stage lit up until midnight. Supporting acts for the night included ETC!ETC!, Pegboard Nerds, Herobust and Alvaro. Key day players included Corporate Slackrs; the rising duo DivClass, who delivered a refreshing set on the second day to our tired bodies; and Spring Weekend veteran, Crespo, who is no stranger to the festival scene. He won Insomniac’s Discovery Project for 2013’s EDC Orlando to play on the main stage. With the promise of keeping Spring Break going forever (since Florida schools’ breaks usually go down the first few weeks of March), this show is a great way to spend one last time with your friends, in absolutely gorgeous weather. Yes, let’s continue with Spring Weekend, because it can only get better throughout the years. What’s not to love about being able to watch Krewella from your balcony as the beach lights up from afar under the stars? Clad only in bathing suits, and surprisingly keeping it classy, the crowd was friendly and just looking for a good time. We are extremely privileged to participate in a festival that others around the country dream of, let’s face it, partying barefoot on the beach is a pretty good time. 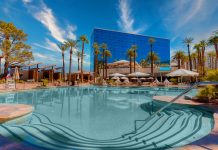