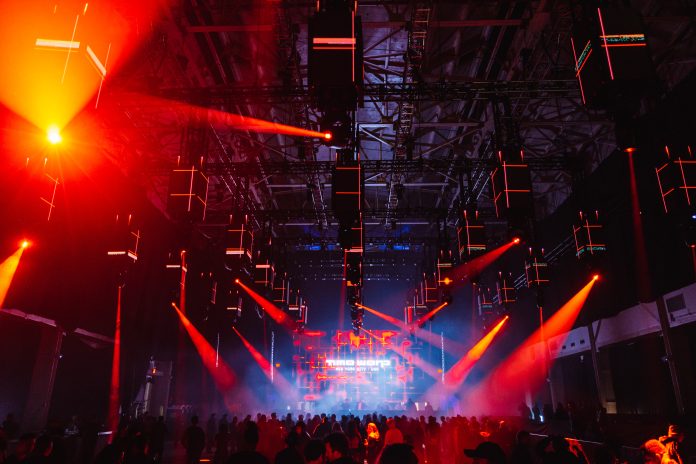 Since its 1994 inception in Germany, Time Warp has expanded globally and established itself as the world’s leading techno powerhouse event. The festival is renowned for combining unparalleled lineups with world-class production, all while maintaining the raw 90s warehouse rave foundation it was built on. The state-of-the-art soundsystem and dynamic visuals immersed attendees in a wildly stimulating atmosphere for two nights in one main room. Fostering mind bending moments that create community and peak experiences on the dance floor, Time Warp’s impeccable curation further establishes it as a techno beacon, attracting fans from across the globe. In the US, Time Warp has long partnered with event producer Teksupport.

This year’s production set up was well thought out and intentional. The ceiling was lined with mini pods of LED screen boxes and a rotational high beam mounted on the bottom. This coupled with a large screen at the stage, created a sense of depth and uniqueness that NYC dance events often lack. Many venues here often rely on a single large screen and simple lighting rigs to carry the show. It is also worth noting that the sound quality and acoustics of the warehouse was superb. This creative and innovated set up definitely breathed more energy into the cold warehouse the event took place in. Often times the synchronized light show combined with the pulsating, chest-shaking, bass took control of my body as we danced the night away. The only rough part of the venue was the out door restrooms as the weather in NYC was in the 30’s both nights. But it wasn’t too bad, and it gave attendees a chance to smoke, grab food at the food truck, or cool off if they were deep in the crowd.