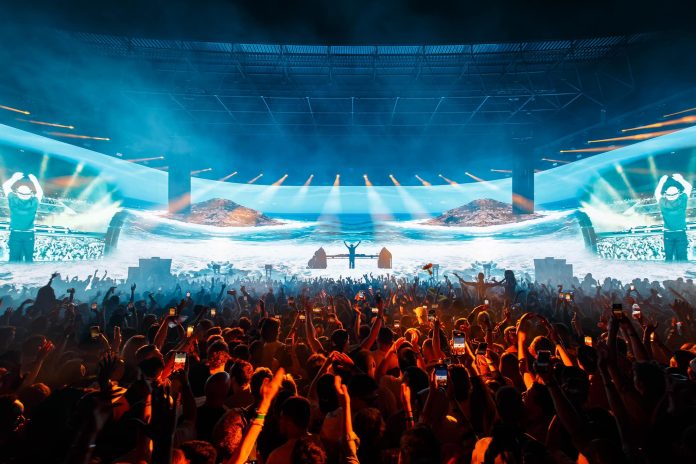 Duke Dumont made his debut at the reimagined Brooklyn Mirage with a sold-out show on Saturday, June 18. He has dazzled crowds for years, with recent major performances like Coachella. His Brooklyn Mirage show was more intimate than a massive but felt like one. The energy was nothing short of great.

Duke Dumont started with one of his biggest tracks, ‘Red Light Green Light‘, getting the crowd moving right away. From 1:30 a.m. to 3 a.m., he delivered a seamless house set that had us grooving nonstop. He dropped EJECA‘s edit of Romanthony‘s ‘Ministry Of Love‘, which he called a “timeless record” that he’s been playing for about eight years.

The visuals were on point, going from mostly black and white to colorized in the end. Duke saved his classics for a feels-charge ending — ‘I Got U’, and of course, ’Ocean Drive’.

“THANKS! @brooklynmirage, to all the crew and everyone in attendance. Epic atmosphere. Until next time NYC. x,” Duke Dumont posted on Facebook on Monday.

Philadelphia-based Kamino was the opener for the night and Cassian played from midnight to 1:30 a.m. Closing after Duke Dumont was option4.

The Brooklyn Mirage opened this season revealing an epic redesign. It unveiled a one-of-a-kind 200-foot-wide LED video wall that wraps around the sides of the stage. The stage is topped with a 100-foot custom-built roof. Brooklyn Mirage 2.0 has been all the buzz in New York City since it debuted in May.

Two days later, the Brooklyn Mirage hosted Duke Dumont. The venue did not hold back in displaying an amazing production.

Duke Dumont does not disappoint, and catching him at Brooklyn Mirage 2.0 which is only opens during the warm season was not one to miss.