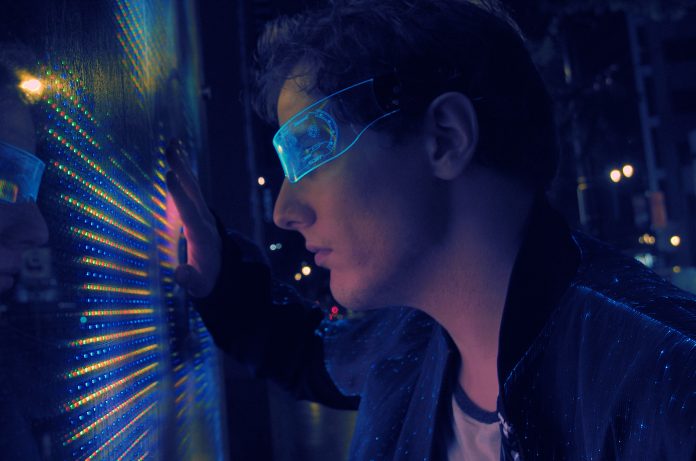 Cyazon continues creating a sonic futuristic world of his own and showcasing his musical skills with every release. His music takes its listeners onto energetic journeys where Cyazon’s characteristic style and sound is palpable. While he keeps releasing fresh mixes for his weekly radio show, ‘Cyber Future’, and working on new music, he took us behind the scenes of the process of working on his latest release ‘Artificial Tears’ featuring musician Becko.
This is what he said.

The idea behind Artificial Tears is based off of a scene in Bladerunner 2049 where Joi the AI hologram meets with K on the rooftop. It’s raining too. So, the imagery is that there’s rain and an AI hologram, which is artificial.

I experimented with using a prophet hardware synth to record the synth lead fills during the drop. I never really have done this before so, I took out short segments of this long synth jam recording I had. The synth sound I used is also similar to the synth in the song ‘Dreams’ by Nero and Zhu, which helped inspire the song.

I would say you can definitely hear Nero with the synth leads fills during the drop on this, as well as some Xilent influences with the Synth Arp in the intro. The oriental pluck in the outro of the song also hints that the song is taking place in the same Bladerunner city, LA, as the movie.

When we were first talking about working together, I sent him both ‘Netrunner’ and ‘Artificial Tears’. So, I feel that collaborating on 2 tracks happened naturally.

I feel that this is a bit heavier-sounding and also has the element of the metal/screamo vocalist in it as well. ‘Netrunner’ was similar, but I feel this is a classic mid-tempo track that 1788-L would put out.

I feel the biggest thing for me, is if I have the intuition to know it’s a really good song or not. It takes a lot of discernment and time to listen to a track to see whether it’s worth releasing.

Some collaborations I would like to happen, even though these would be kind of big would be, Nero, The Weeknd, Rezz, deadmau5, Steve Aoki, and probably a lot more I can’t think of at the moment.

A few collaborations on and off that will take a while to complete. I’m also experimenting with a new sound/genre for my music and seeing where that leads.