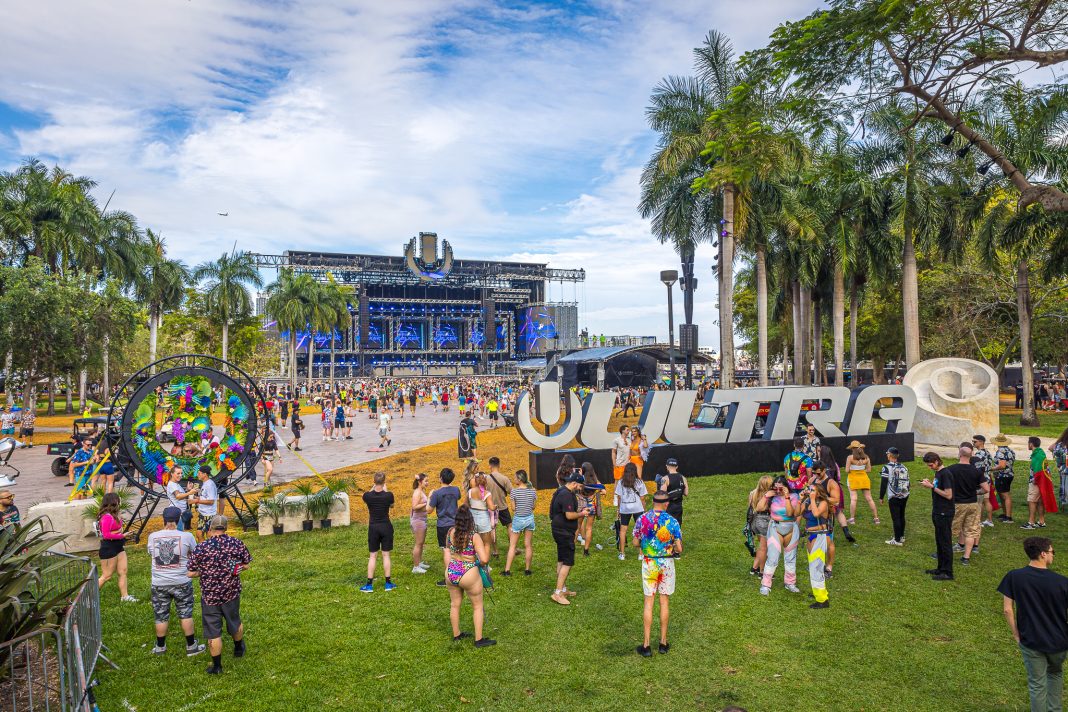 Many of you are still feeling those post-festival blues and re-listening to all of the sets from Ultra Music Festival 2022, but enough time has passed that a proper review is in order. Ultra Music Festival 2022 was unique in many ways. It was not only’s Ultra’s big return after 2 years of COVID, but it was Ultra’s big return home to Bayfront Park for the first time since 2018. So not only does Ultra 2022 compare itself with the other major festivals like Tomorrowland and EDC, but it also deserves comparison with Ultra 2019 at Virginia Key. I’ve been lucky enough to attend every Ultra in Miami since 2012, so I can definitely compare the various years. While Bayfront Park still has its constraints, it felt so damn good being back at Ultra Music Festival in Downtown Miami. For the festival, the artists, and the previous attendees, it felt like returning home. Read on for our many hits and a few misses of Ultra 2022.

In 2019 I told you to stop romanticizing Bayfront Park. But when you’re actually at Ultra in the middle of Downtown Miami with the world’s greatest DJs set against the backdrop of a tropical metropolis, it’s hard not to feel a sense of awe. There are few other festivals that can claim a venue in the middle of a big city, and fewer still that have a waterfront setting. Ultra has both, and the spectacular views are not the only benefit. All you have to do is get yourself into the Downtown Miami area, and you can walk right over to Ultra. Plus, the time-honored Ultra pregame tradition is back. Now it’s easy to meet up with your crew somewhere downtown, gather your things, and go together. No more worrying about shuttle stops and being stranded on an island miles away from the nearest metro stop. It’s easy to see why Ultra fought so hard to come back home.

The reason I told you to stop romanticizing Bayfront Park in 2019 is something many newer Ultra attendees discovered for the first time this year. Bayfront Park is relatively small, and Ultra technically outgrew it years ago. Bayfront Park is about 32 acres and Ultra adds some space by closing off parts of Biscayne Boulevard, so let’s call it 40 acres. EDC Vegas has over 1000 acres to work with and Tomorrowland’s De Schorre Park is about 185 acres. Ultra has more or less maximized the space so there is very little room for change or additional areas/stages. This was clearly felt by Ultra attendees who had only attended in 2019 and complained about the crowding and the pushing. Unfortunately, the crowding is always going to be part of Ultra at Bayfront Park. This was most noticeable at mainstage and generally walking from place to place. However, the more mature crowds at the Resistance areas provided a much more spacious and friendly experience.

Perhaps somebody up there was looking out for Ultra during its big return because the weather during this year’s outing was some of the best of any year. It was sunny and clear the entire time with the temperature getting a bit cooler at night. Those who remember extreme heat or torrential downpours would agree that both of those take away from the experience. That weather combined with the beautiful location is what makes Ultra one of the world’s best festivals.

This year had some additional unique factors that added a bit to the complexity. You had thousands of ticketholders from 2020 that were rolled out automatically to the newly created PGA category, and you had all of the built-in bathrooms at Bayfront closed for renovation. This meant that Friday lines for entry were a bit insane, and were actually longer for PGA than they were for GA, and there was a bit of chaos when needing to find a bathroom. The locations were changed from years past and there was a bottleneck at the entry to the PGA restroom area while wristbands were checked. Once inside, the PGA restrooms were quite nice, but the bottleneck and the fact that you had to separate from your GA friends when needing to use the restroom were a bit of a pain. Both of these issues should be ironed out next year with fewer PGA ticketholders and the permanent restrooms available. Although there isn’t too much that will make the bar lines easier.

For those new to Ultra, a long entry line on Friday is just a thing that always happens. Friday is always chaotic, but the kinks are worked out by Saturday and Sunday. Everybody gathers all at once right when the gates open on Friday, but on Saturday and Sunday people are able to stream in from noon onwards, easing up the line pressure.

As part of compensating 2020 ticket holders for their 2-year deposit with Ultra, the festival automatically upgraded everybody to its newly created Premium General Admission category. These tickets came with an exclusive entry line, exclusive clean RV bathrooms, and a special lounge area at the Worldwide Stage. The only problem was that in 2022 there were probably more PGA ticketholders than GA ticketholders due to the carryovers. The result was that PGA was actually a bit more crowded than GA entry lines. However, this won’t be an issue starting next year and the PGA benefits are pretty worthwhile compared to GA and VIP.

One of Ultra’s best qualities is its reputation for the newest and best music each year. Ultra has always been the kickoff of festival season, and it was always the festival where all the artists and labels debut a new set filled with IDs that will be released throughout the entire year. Not only did Ultra have that this year, but many artists finally unleashed a torrent of music they had been sitting on for the entire COVID period. Ultra is also the tastemaker festival, the place where Hardwell felt comfortable making his big return after a 4-year hiatus with a new techno sound. It’s the place where you see pretty much the best of every subgenre, and anybody not at Ultra is in Miami anyway. Not only that, but everybody is on their A-game with memorable sets that you’ll be rewatching and relistening to for many months to come. Swedish House Mafia has already announced they will close the main stage in 2023.

The Ultra Resistance Megastructure is possibly one of the greatest stages in the whole world. Sure the Creamfields Megastructure is bigger, but it doesn’t have all the moving LED panels on the ceiling that come down to sit right above your head. It also doesn’t have the gorgeous Miami skyline view when looking out from the stage. The megastructure actually costs more to build than the mainstage, and it’s easy to see why. The production at the megastructure is out of this world. There is basically no better place to see DJs like Carl Cox, Tale of Us, Adam Beyer, Amelie Lens, Nina Kraviz, and so on. Other festivals are starting to bring the techno stages into competition with the Resistance Megastructure, but they aren’t there yet.

The Ultra Mainstage is always a wonder, especially because you have the water on one side and the beautiful skyline behind the crowd. While this year’s mainstage looked odd during construction and maybe didn’t photograph as well as past mainstages, it was quite the beast in person and was one of the most creative mainstages Ultra has done. It was the first major change in the overall design of the stage since the change from 2013 to 2014, due to the incorporation of 3D elements with the cubes. Perhaps there were some budgetary constraints on the number of LED panels, but that issue will only get better as we get further away from COVID.

The Live Stage is always great, and when Ultra isn’t there it’s gorgeous enough on its own. It speaks to how wild Ultra is that the Live Stage is just one of many you’ll visit during the weekend.

This was where the budgetary and venue size constraints were most felt. The UMF Radio and Cove stages were a bit small and not overly exciting. While it was great having The Cove right next to the Megastructure, the setup and crowding at The Cove made it hard to leave the Megastructure, no matter who was playing at The Cove. Perhaps The Cove would work better with a 360 design or something that isn’t just a standard stage that forces everybody to crowd upfront. This was the first year trying this layout and is something Ultra will certainly be evaluating to tweak for the future. Those yearning for a return of Arcadia are going to have to accept the hard truth; Arcadia and The Spider are not coming back. Hopefully, Ultra can do something a little more exciting with The Cove area in the future.

The Worldwide Stage probably lacked some LED screens it used to have due to budgetary constraints, but it has been more or less the same stage since its inception. Unfortunately there just isn’t much else to do with the space, but it’s still a cool stage that isn’t really seen elsewhere. Having ASOT there was obviously a bit odd, but it wasn’t as bad as I expected it to be. Perhaps Armin can do another techno b2b in 2023 and get back to the Megastructure for a set.

There has been a lot of internet chatter about the sound reduction being very noticeable at all stages. I can only report about the online complaints because my own experience with the sound was fine. That being said, I tended to be closer up at the stages. We don’t like a sound reduction in general, but it was part of the deal to bring Ultra back to Bayfront so we have to live with it.

Ultra Music Festival may not focus on that warm and fuzzy public image like EDC and Tomorrowland, but Ultra is literally run as a family operation. It is not owned by a megacorporation and didn’t sell out even at the darkest of times. Ultra is basically still a family operation with a surprisingly small cast of characters running the show behind the scenes, many who have been there for years. Like a superhero ensemble movie, the team got back together in 2021 after being dormant for two years. They squashed beef with the Downtown neighbors trying to take Ultra down and expanded the festival’s community outreach so that Miami can appreciate having Ultra in its Downtown area.

This close-knit family style of the festival drew criticism during COVID, but it also allows Ultra to remain the unique festival that it is. The incredible talent booking at Ultra is why the festival always has a unique lineup with exclusives that are ahead of the curve. Ultra may catch flak, but it will never be an also-ran festival because it stays true to its roots. Without basically any fanfare, this tight-knit group put together another world-class festival and provided a fantastic experience for the members of the press that attended.