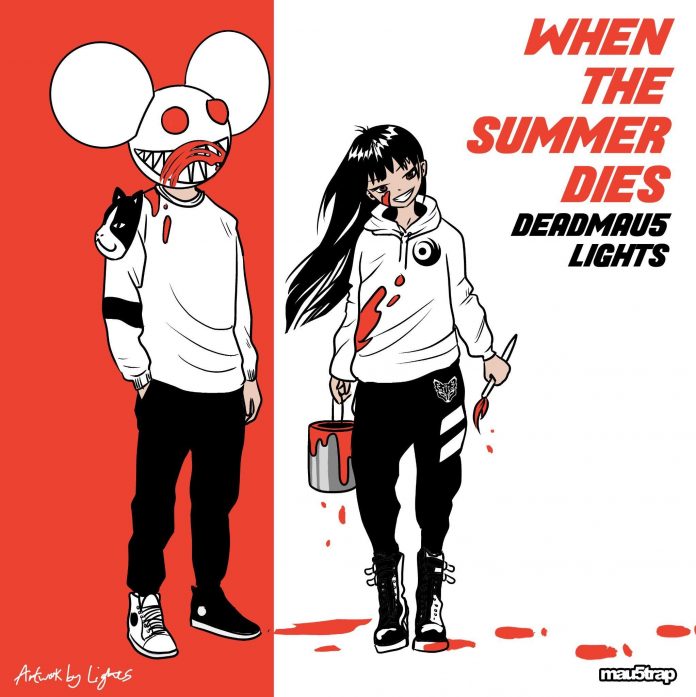 Deadmau5 is out with a spicy new track titled ‘When The Summer Dies‘ featuring the amazing vocals of Canadian musician, singer, and songwriter Lights. We see this single’s release out on mau5trap and it’s a perfect track for summer. We first saw the duo collaborate together in 2018 with ‘Drama Free’. Now, they’re bringing the same big energy vibes with this release.

Lights’ bright vocals perfectly add the pop-punk, playful personality to the track. Meanwhile, we get the progressive chord progressions of the melody accompanied with a driving bassline that is the signature of the mau5 himself. It’s bouncy, it’s menacing, and it’s just what we wanted to hear from the GOAT. I can see this being played in a set of his, and he’s playing at Escape this Halloween. Epic anthem or what?

We know Joel to be a multiple JUNO Award-winning and Grammy-nominated artist. His electronic music production skills prove to be immaculate and his singles often top dance music charts. He’s taken us through a long successful musical journey with more to come. He even added his first-ever film score for the spy thriller ‘Polar’ back in 2019. Even though he has recently divorced, he finds new light in his most trusted avenue: music.

What’s more, is he’s holding a dystopian worlds collab jam where you get to create the worlds for his next music video. In partnership with Core, this is for every creative content creator out there or even gamer. Unleash your own insane game designs on the world and set it to the greatest soundtrack of all time. Check out the contest video for more details and good luck! This looks like a rad opportunity. Winners can meet Deadmau5 but there’s also over $500,000 in prizes. The deadline to enter is July 26th.

Listen to their newest track below.