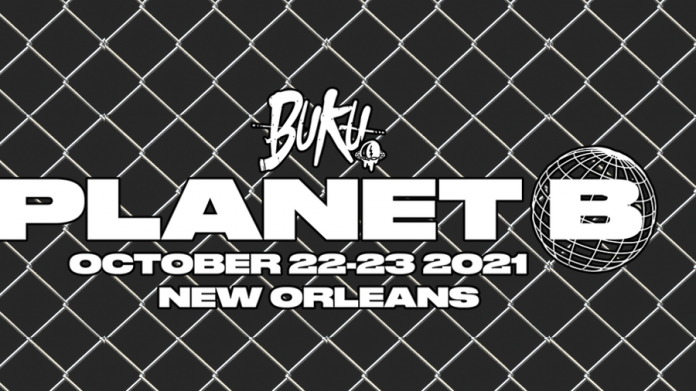 BUKU: PLANET B, a one-time-only, alternative take on BUKU Music + Art Project, announced their lineup will drop Tuesday! This first-ever event will take place this October 22-23 at the Market Street Power Plant in New Orleans, LA.

Like most major events, BUKU Music + Art Project fell victim to the onslaught of event cancellations last year. The festival, originally scheduled for March 20-21, 2020, featured a stacked lineup including artists like Tyler The Creator, Flume, Zeds Dead, Taking Back Sunday, Roddy Rich, Megan Thee Stallion, and so many more. Just a week before the scheduled event, it was postponed to September 2020, but as COVID-19 continued to ravage New Orleans and the rest of the world, the BUKU team cancelled the 2020 event altogether just a few weeks later, with the new date set for March 2021. Unfortunately, the cancellations didn’t stop there; in December 2020, the BUKU team stated the festival wouldn’t return until March 2022. However, they also surprised us with the announcement of BUKU: PLANET B to hold us over until then.

The BUKU team originally described BUKU: PLANET B as “an immersive, one-time-only, alternative take on BUKU.” We expect it to be a smaller-scale, more boutique version of the flagship event, inspired by BUKU’s OG days. We can’t wait to see what the lineup reveal will look like tomorrow!