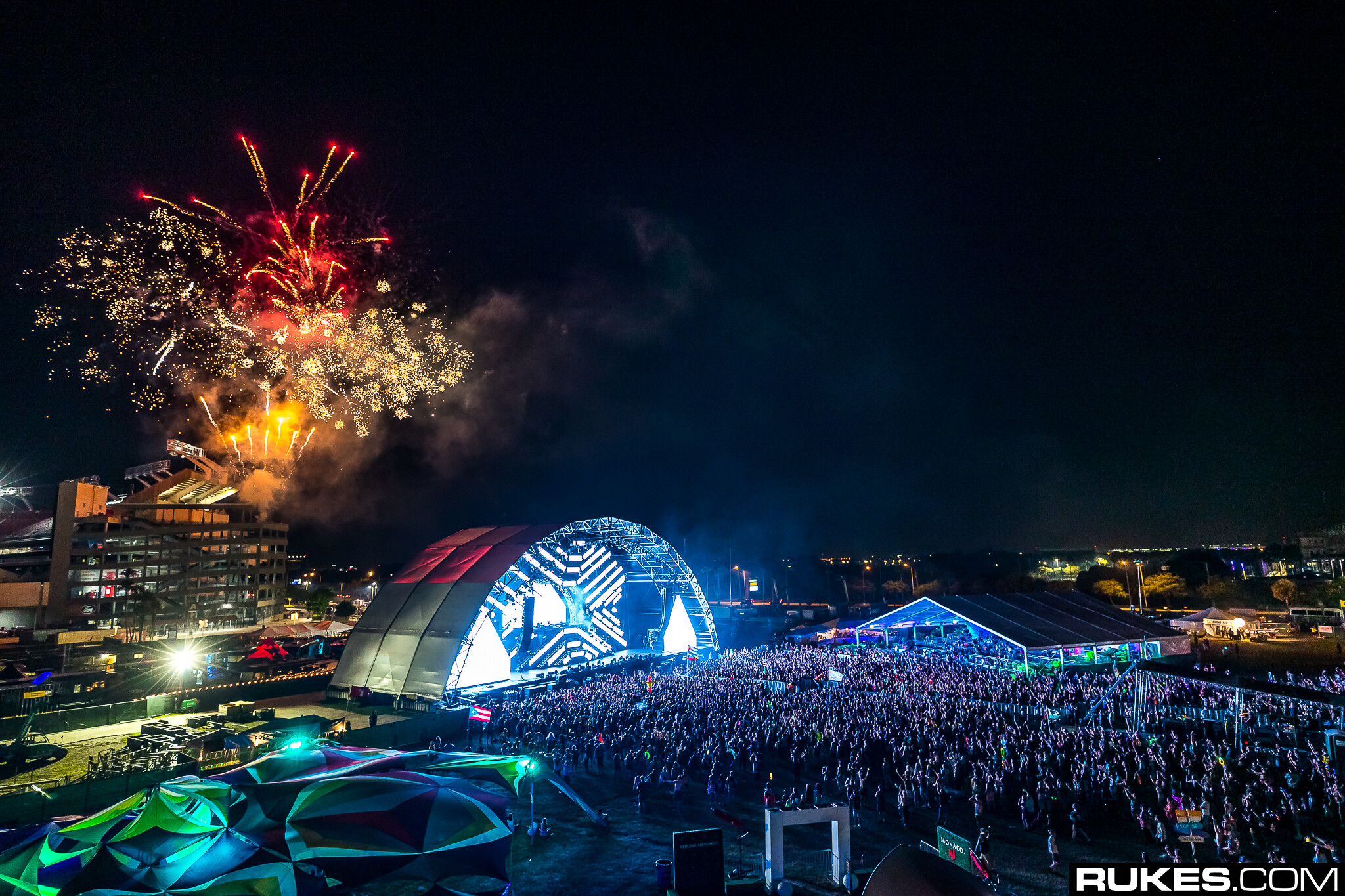 All photo rights belong to RUKES and Disco Donnie

It was hot. 90 degrees sizzled that Saturday at the Raymond James Stadium. I could feel my sweat and the dust clotting against my skin, black streaks running down my legs. But it didn’t matter. You know that’s a part of the experience, especially in a place like Tampa. Outside, I waited in a herd of neon, girls in fishnets and dudes in ironic tees towering over me. Destructo had just started playing, so I pushed my way forward because I was alone and small and wanted to get in already.

It wasn’t the most of beautiful festival grounds— mostly sand and patched grass— but the vibe more than made up for it. Most of the security guards greeted you with a smile and the bartenders danced while they opened your beer. If you had the official app then you received notifications about schedule changes, reminders to drink water or to help someone who looks like they’re in trouble. All of this set the precedent that though this festival wasn’t as big as Ultra or EDC, it had its own charm. It was intimate. 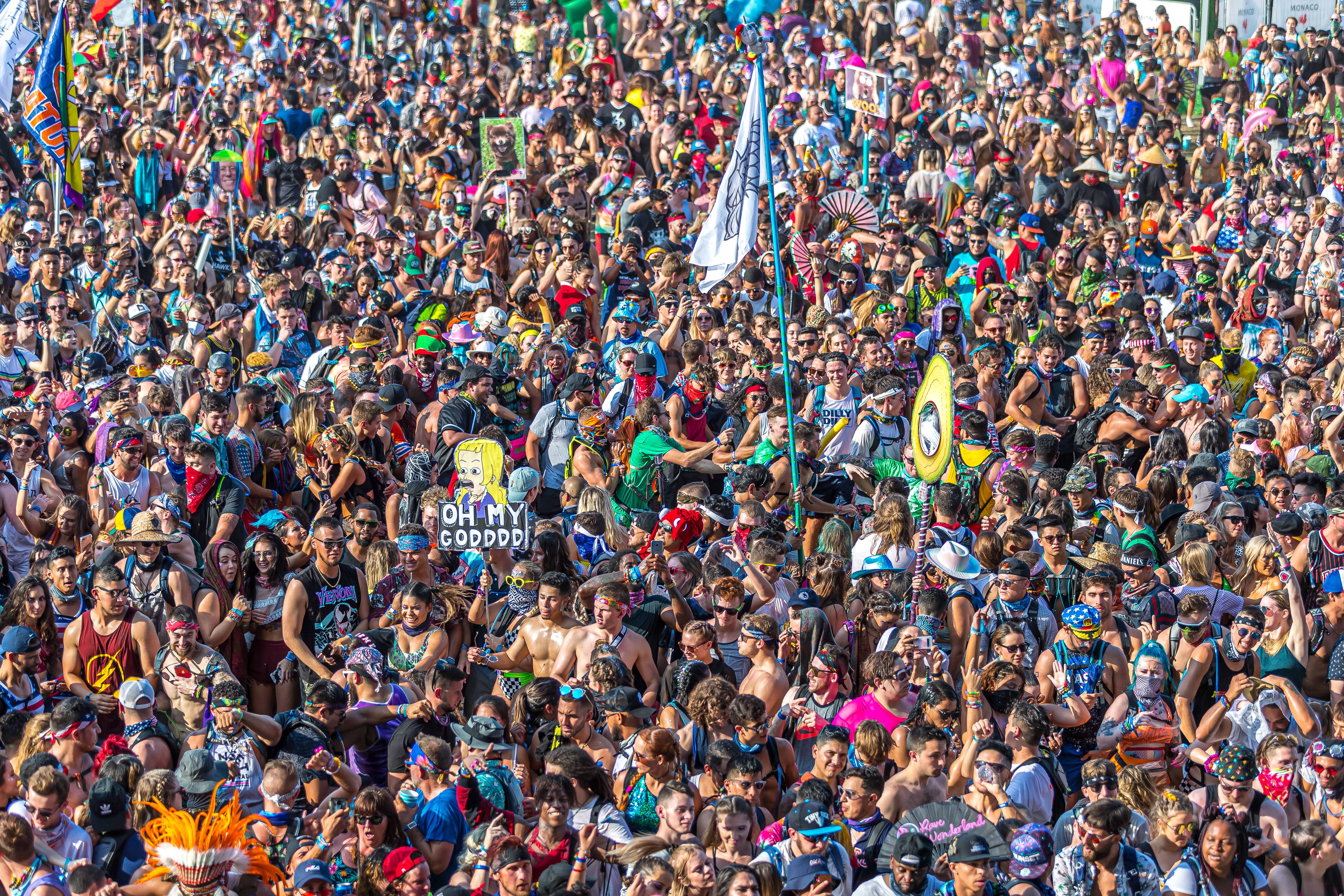 Sunset stage was the main stage, where headliners Zedd and Dog Blood concluded the nights. If you were close to the front you could see the dancers and brightly colored entertainers spinning in the air or blowing you kisses. The pyrotechnics exploded without fail during the intensive moments for each artists’ set. In the back, there was a red geometric tent, one auburn panel layered over another. They left the perfect amount of space between the stage and the dancefloor for those who needed to chill out without sacrificing the music.

The Eclipse stage was taken over by DeadBeats and featured artists like Gammer, Flux Pavillion, Rusko, and Zeds Dead. This was the place to break your neck and that is probably the only description you need for now. Really, it was wild. Read more about their performances below.

Horizon stage was parallel to Eclipse, which made it friendly to navigate the grounds, especially toward the night. I’m not the best with directions, much less when it’s dark and I’ve had after a few drinks so I really appreciated that. I found myself always coming back to the Horizon stage. Anjunabeats was the host for the weekend, which made it a safe haven for me— the place to rest after moshing and headbanging.

Not a Stage but Still Noteworthy

Overall, the gem of the festival was the Sunset Chill House tent. It was completely enclosed, AC blasting at all times. They had a Red Bull-sponsored bar inside, a sweet deck set up, and, most importantly, the tunes. You went inside to escape the sun, but what you found was a dance oasis. I recommend checking out Seventeen Dream and Valentina Schwartz. They created infectious fun energy on the dancefloor. If you entered the tent alone, you walked out with friends. At the end of the day, isn’t that what festivals are all about?

It began with Destructo. He had attracted a large crowd despite the high heat at five in the afternoon. You could tell how loved he was by the way the crowd roared when he started. He set the mood for the rest of the evening: f*ck negativity, just dance. After a while, we DID need a break from dancing. The organizers made it easy to refill your water by setting up stations all around the grounds. They had volunteers refilling your water for you, which was such a smart move. The line moved quicker so you wouldn’t be fumbling with your bottle or Camelpak. It’s the little things guys.

At the Eclipse stage, Gammer stood out from the pack. He catered to his original hardstyle fans while balancing out an exhilarating dubstep performance. There were moments where I had to force myself to take a breath because I had lost stamina. Rusko also gave a memorable performance by ending with a tantalizing reggae groove. At the Horizon stage, we saw heart moving sets from Will Clarke, Walker & Royce, and Chris Lake. The Sunset stage gave us hypnotizing beats from Tchami and the feels from Illenium. We left that night with a grin, knowing that day two was only going to be better. 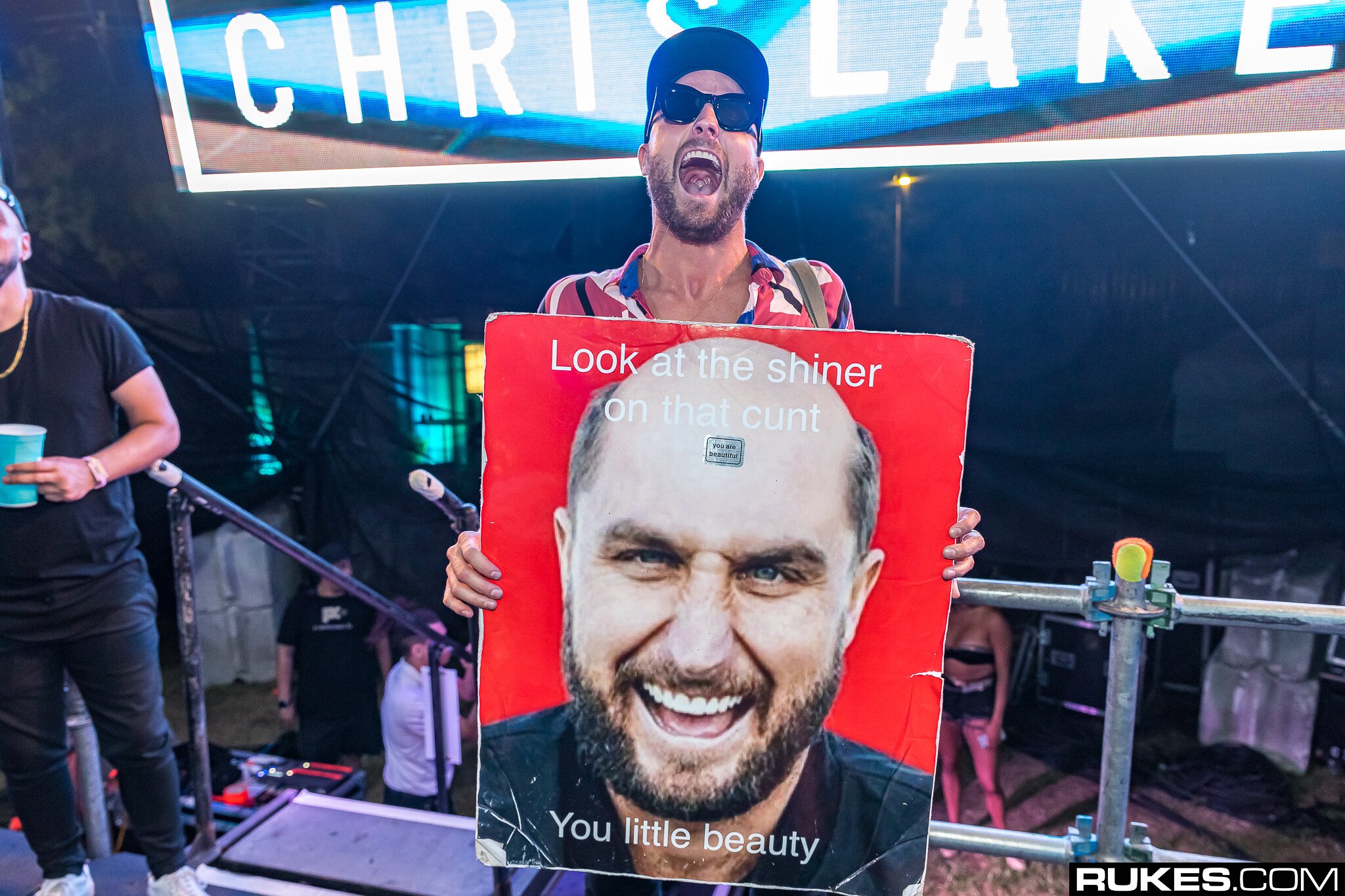 We Interrupt This Review to Say…

There were some low points though. I’m always a skeptic when it comes to a “cashless” event. I love the idea of only using wristbands as a form of payment. There is a smaller chance of theft or loss and it keeps the business end more organized. However, technical difficulties are bound to happen. Sadly, and almost prophetically, SMF was a victim of this. Their cashless wristband system was down for most of day two. I was able to buy something before the system crashed, but others weren’t so lucky. For some, it ruined the good vibes that were crafted on day one. Unlike other festivals, SMF is refunding people who didn’t use up all of the wristband money. The 5% processing fee is annoying, but at least they are doing something.

At this point, the festival grounds were familiar. You had your favorite spots, favorite vendors, and bartenders. We had a plan on who we would see but then we received a notification that the schedule had changed. Some artists had plane troubles so they had to shift some acts around. Despite that hiccup, the vibe stayed strong. The Sunset stage felt like a magnet because of back to back to back performances from Phantoms, BONNIE X CLYDE, and 4B. I pulled away towards the end of 4B’s set to catch Audien. After a high-energy show, he hit us with consecutive Avicii tracks, ‘Levels‘ and ‘Wake Me Up‘. I swear, some people started tearing up— myself included.

Due to the schedule changes, the evening was packed with popular acts, and many of them coincided. Kaskade didn’t disappoint. His set occurred at the Sunset stage right as the sun set (I think they did that on purpose) and I loved every minute of it. Every single minute. After that, we checked out Getter‘s set. We were curious to see if he would play anything from his Visceral album, but he didn’t. It was business as usual, which I get because of the backlash he received from fans. Then we moved on to Alison Wonderland whom I have been a fan of since her debut album, Run. What amazes me about her is how she’s consistently evolving. She brings out this immense passion for every performance. That love is contagious which is why she is one of my favorite artists. 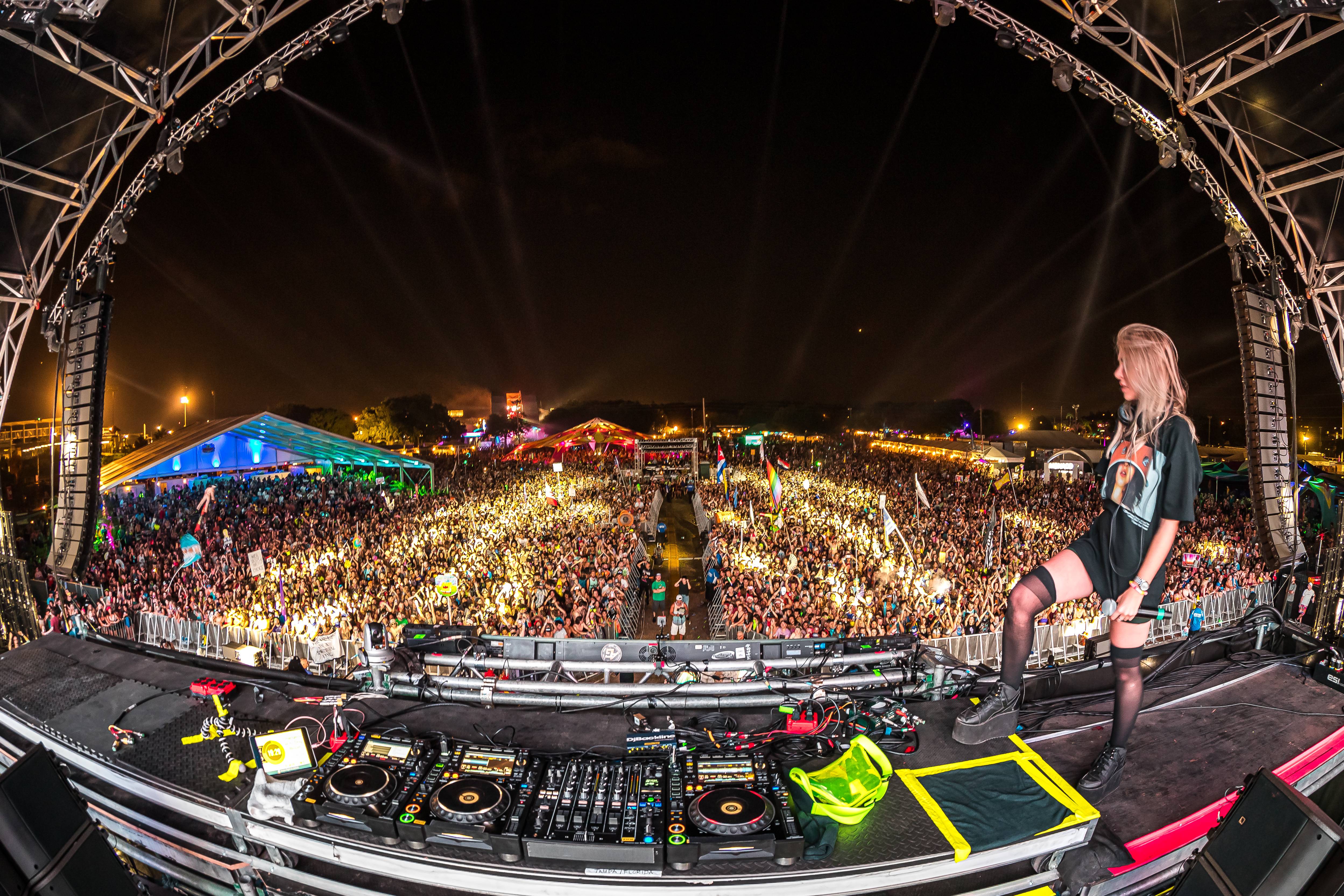 Let’s talk about the end of the night. The hardest part of the entire weekend. Why? Because Zeds Dead, Dog Blood, and Mat Zo were on at the same time. I couldn’t decide on one so I split my time between the three. With Zeds Dead we got to hear ‘Rescue’ and some of my favorites from Northern Lights. I was so tempted to stay, but I knew I had to catch Dog Blood. Their vibe was on a similar wavelength, but times two. If I had to describe their set in one word it’d be adrenaline. I danced for as long as I could until it neared midnight so I explored on to see Mat Zo. Guys, he stole my heart. His crowd at the Horizon stage was considerably smaller than the other two, but that didn’t stop him from giving it his all.

Fireworks blasted off in the background. We could hear Skrillex, his voice hoarse, yelling into the mic, one, two, three! To our left, the Eclipse stage vibrated from Zeds Dead’s final song, followed by a roaring crowd. And in front of us was a wild Mat Zo mixing live, his full head of hair bopping to his own music, completely in sync with his audience. I didn’t care that I somehow got dirt on my face or that the dude next to me smelled like a locker room, or even that I had lost my friend somewhere at some point in the night. If you have the right vibes and the right music, you’re okay.

So that was SMF. An amazing intimate experience packed into two days that makes you think, “yeah, great things do come in small packages.”

Eric Prydz Holosphere Goes to Tomorrowland and Creamfields in 2020

Updated: Ultra Finally Signs Contract With The City of Miami