Lightning In A Bottle, one of North America’s premier festivals, has revealed its lineup for 2019!  The festival will last from May 8-13, and will be hosted at it’s new home of Buena Vista Lake in Central California .  The new location is certainly an upgrade considering the grassy topography, the trees, and swim-friendly shoreline crafting a more intimate experience.  LIB will be hosting three stages; Lightning, Woogie, and Thunder.

The Woogie stage will be continuing onto it’s legacy by acting as a House and Techno haven.  Artists schedule to perform atop this stage include progressive icons such as Lane 8, Damian Lazarus, Recondite, Rampue, Dirtybird Shiba San, Escapade (Walker & Royce and Ardalan), and even Luttrell from Anjunadeep.

Finally, the Thunder stage will host some of bass music’s most celebrated acts.  Artists performing include The Polish Ambassador, G Jones, Clozee, Alix Perez and EPROM‘s Shades project, and 1788-L.

Tickets for Lightning In A Bottle can be found here and are on sale now so don’t delay! 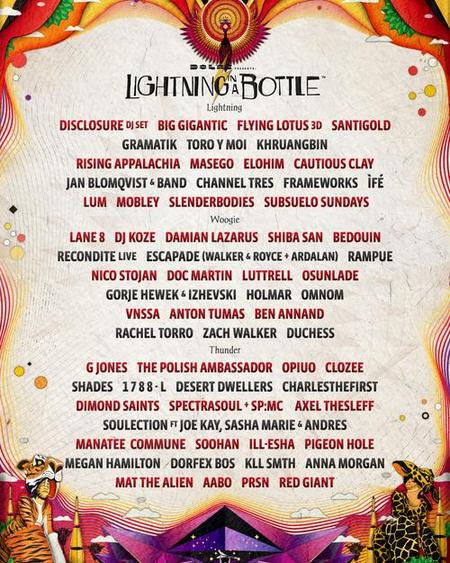