Home Events Ultra Music Festival Not Exactly Out Of Miami… Yet

The vote on whether or not Miami‘s Ultra Music Festival would be returning to its home in downtown Miami next year has been a long time coming. The big vote finally happened, and many were shocked by the decision. Earlier today the news broke that the Miami’s City Commission’s unanimously ruled to reject the contract for UMF‘s 2019 return.

While every media outlet jumped at the opportunity to break the news, it might all just be hogwash, and we can almost guarantee that Ultra will be back at the Bayfront Park in 2019. The reason I say this is because of a tweet originating from Ultra’s official Twitter account.

Within the tweet, the Dance Music Festival expressed disappointment with the verdict of the ruling. It also went on to state that they are still working with officials and locals alike to find a resolution. They then went on to clear the air, as most of the reports revolving around this seemed to be a bit sensationalised. They then state that the vote:

“represents only a denial of certain terms of the current proposed 5-year contract, rather than the continued production of the festival itself.”

This is a gamechanger, in that it expresses not only the fact that the decision is not final, but that it’s merely a denial of the current terms. As any good business person can tell you, negotiation is key. While It is no secret that the residents & City of Miami are not exactly happy with Ultra, the benefits of hosting UMF cannot be denied. Bringing 160,000+ paying attendees to a city is never a bad thing; I’m sure that the millions of dollars in tax revenue don’t hurt either. 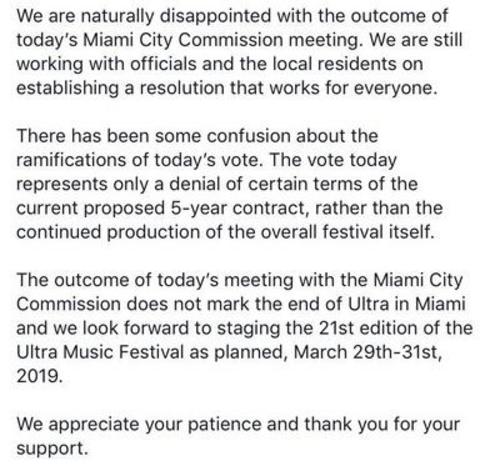 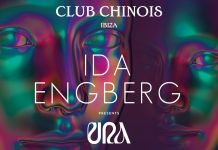