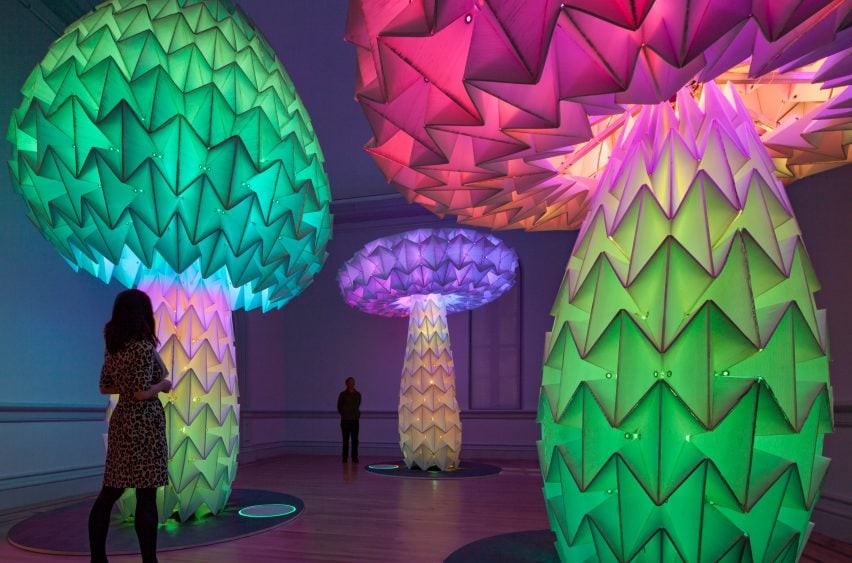 On the second-floor room of Washington’s Renwick Gallery, a cluster of three ceiling-height plastic mushrooms glow in a kaleidoscope of neon colours.

The installation, Shrumen Lumen by the FoldHaus Art Collective, is one of many displays that were originally on view under the night sky at the famous Burning Man, a week-long annual festival in the Nevada desert that celebrates the various joys of communal living, 24-hour dance parties, public art, provocative costumes, and many personalities.

The impressive temporary structures built during the annual Burning Man festival are the subject of an exhibition at The Renwick Gallery of the Smithsonian American Art Museum in Washington, DC.

No Spectators: The Art of Burning Man features the projects that many attendees construct. They range from small-scale artworks to massive displays. Some of which are ceremonially burned down at the end of the festival. Most of the art in the Renwick was originally installed at Burning Man. However, a few objects, including an 18-foot-tall, stainless steel sculpture of a nude woman dancing (Truth is Beauty, by Marco Cochrane) are variations on larger, since incinerated, sculptures that once existed on the playa.

This year’s Burning Man is, of course, already sold out, but access to the Smithsonian exhibit at the Renwick Gallery is free. The exhibit is open now through January 21st, 2019. Watch the beautiful promo clip below: