For many techno aficionados, Movement is the mecca. Held in Detroit, Michigan; this festival hosts some of the leading names in techno. Past years have seen the likes of heavy hitters like Carl Cox and Adam Beyer taking the stage, which stands in stark contrast to this years lineup.

For a festival that has made its name on the pounding repetitions of underground dance music, would-be attendees this year are left questioning some of this year’s bookings. While there are many acts that fit within the genre, names like Diplo and Wu Tang Clan are far from the norm. While names like Rezz and Mija have definitely skyrocketed into popularity over the past two years, the usual crowd of Movement would easily trade them all in for a single set by Richie Hawtin or someone else of that caliber.

Why the sudden turn in flavor? Many critics say that Movement is purposely running their festival into the ground. Any while this might be harsh words for this mainstay festival, it could be argued that even Tomorrowland has a better techno lineup that Movement. Take a quick glance at the lineup below, and if you’re interested in snagging tickets for this upcoming festival, they can be purchased here. 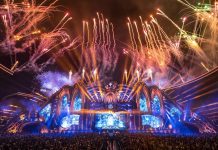