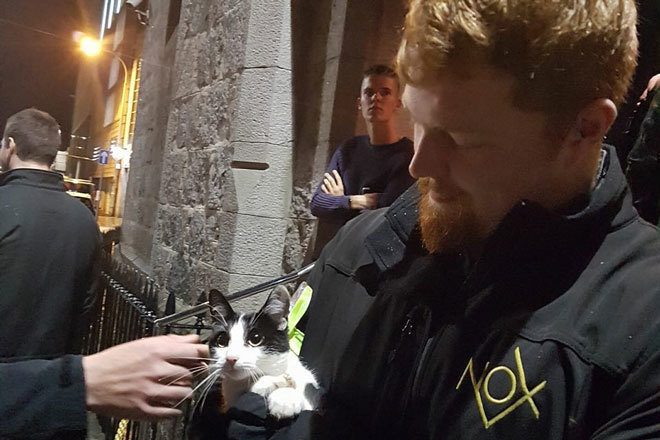 A good party always draws a crowd, and Nox nightclub in Aberdeen had a feline guest try to get in two nights in a row last week.

On Thursday night, security manager Lewis Thomson found the cat and out of concern for her safety in such a crowded area, tried to pick her up but she ran away. After making her escape, she came back again Friday night and tried to sneak into the club. She made a good attempt but didn’t escape Thomson’s sharp eye as he caught her again before she could bust some moves on the dance floor.

Thomson cared for the cat before beginning the search for her owner. “She wasn’t acting like a cat that had been outside before,” said Thomson. According to Thomson, the cat looked like she had not eaten in ages so he took her home and fed her. On Saturday, Thomson made a trip to the vet and was able to locate the cat’s owner thanks to the microchip.

The cat, Sunshine, would finally be returned to her rightful home after being lost for 10 days. “It’s going to be an emotional goodbye. I’m just happy that she’s managed to find her way home,” said Thomson.