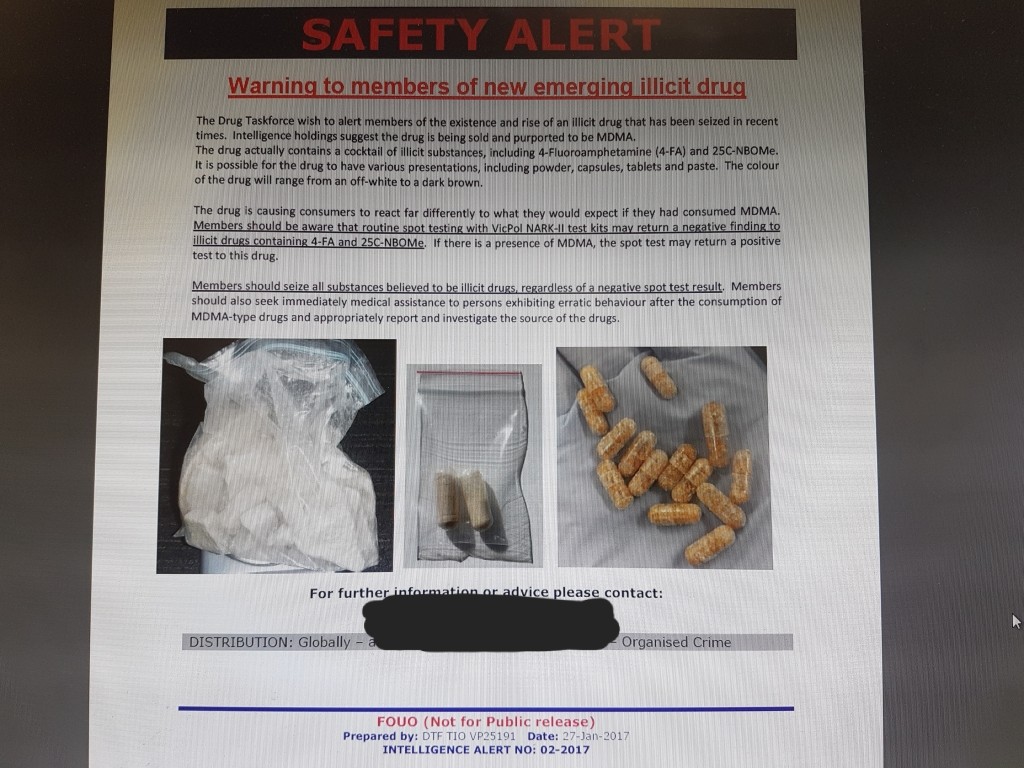 In January, three people were reported dead and 20 were hospitalized in Melbourne, Australia.  The cause was speculated to be an overdose, but a formal explanation was never released as to why such a large group of people were affected. Now, a leaked police memo gives us insight into the cause and what Victoria Police discovered in a deadly batch of MDMA.

The memo was stated to be “not for public use” and was circulated internally among Victoria Police’s Drug Taskforce.  The memo was obtained by Vice and warned officers about “the existence and rise of an illicit drug that has been seized in recent times.” It also stated that the batch of MDMA in question “contains a cocktail of illicit substances, including 4-Fluoroamphetamine (4-FA) and 25C-NBOMe.”

The substances found in the MDMA were both discovered to be highly dangerous. 4-FA is an amphetamine-type stimulant and 25C-NBOMe is an extremely potent hallucinogen, which cannot be tested for using conventional testing kits. More concerning news was the bad batch of MDMA was still passing conventional kits because the capsules still contained enough enough MDMA to be tested positive for it.

The controversial issue with this discovery is that this discovery was made a week after the deaths occurred and the information was not made public. Will Tregoning, the executive director of Unharm and Harm reduction advocate, suggested that this information should have been released sooner to warn buyers across not just Melbourne, but the entire Australian market.

When asked why this information had not been made public Victoria Police stated, “Synthetic drugs can take a variety of forms. If we issue a warning for one particular lot, that does not mean the drug isn’t also doing the rounds in other forms and so it is inappropriate to provide a specific warning.”

It is very possible that more capsules of the unusual and deadly are circulating in the Australian Market. Users are warned to look out for an “unusual looking, wettish, brownish capsule”.