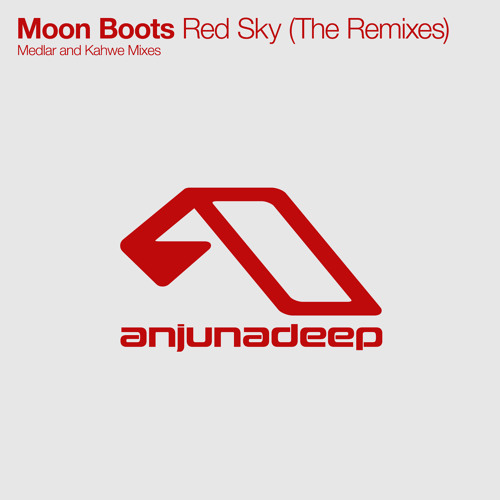 Making its debut with the label last year as part of the Anjunadeep Vol. 7 compilation, Moon Boots‘ “Red Sky” fits perfectly into the mold that the Anjuna team has been crafting over the last couple of years. Having seen support from Annie Mac on BBC Radio 1, Jason Bentley on KCRW, Gorgon City, Tiga and Claude VonStroke, the time has come for the remix package.

Medlar and Kahwe, two of the UK’s rising talents, were selected to give their takes on the tune that’s just oozing with that old school house flavor. With remixes of Disclosure, Groove Armada and Tensnake under his belt as well as having put out a slew of attractive EPs on Wolf Music, Medlar showcases his strengths for his first time on the label. His rendition pumps up the volume so to speak with more upbeat melodies and a matching bassline while incorporating stems from the original. The Kahwe remix is something you would expect from the return producer: mellow vibes accompanied by atmospheric percussive elements, entrancing basslines and sultry melodies. The release date is this Friday, so be on the lookout for them on your favorite download portals.