Home Videos Experience Above & Beyond Ringing in the New Year

Whether you were out in the wild watching the ball drop this New Year’s Eve, kissing your loved ones under a sky full of fireworks or cuddled at home with your one and only Netflix (all three of which were great options), ringing in 2015 with Paavo and Tony of Above & Beyond is that magical fourth option only one in seven billion get to experience – or in this case, two in seven billion. As the new year was sweeping through the world, two Australian twins had the serendipitous pleasure of pushing the button to ‘Blue Sky Action‘ (did you guess right?) as the clock struck midnight at Sydney’s New Years Eve Countdown show at The Hordern Pavilion.

Exchanging heartfelt celebrations on stage and leading the crowd into an explosion of jubilee, these lucky twins have set quite the bar for themselves to start off the year, and we are wishing everyone the same adventurous, fortuitous, and ecstatic sentiments for 2015. Though the new year countdown has disseminated in the past, there’s an (arguably) more anticipated date Anjunabeats fans are gnawing at their fingernails, counting down to: January 20, the expected release date of Above & Beyond’s new album We Are All We Need. We anticipate a huge year for electronic music, and there are no better industry veterans than those of Above & Beyond to lead the way. Relive the New Year’s Eve countdown and don’t miss the glory to be released on the 20th! 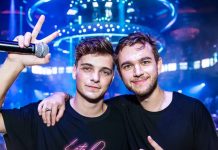