This article topic has been percolating in my consciousness for the last year or so, however the spark that would eventually call me to action didn’t ignite until recently. We are in an unparalleled age for dance music: massive corporate buy-ins and sponsorships, an influx of demand for artist albums and bus tours throughout the U.S., and in turn an increase in demand from club owners for DJ bookings in local areas. Here is where initial issues with the mainstream breakthrough phenomena of a prior underground scene would begin.

Promoters and club owners in smaller markets may not be, shall we say…that versed in dance music as a whole. So where to turn? The Beatport charts. And what do they see there? A slew of big room commercial cutouts of one another, basically. What conclusions are those promoters to draw then? That the only style that should be represented, that the most popular and well-received..is this style of house. Thus, most acts that they attempt to book will probably be in this style, or the underground DJ’s that they locate within their talent hunts will be expected to play big room “bangers” during their sets at said club.

Sadly, this occasionally manifests in DJ’s being yanked from the decks during their sets because they chose to explore their own personal artistic creativity in their set, and chose not to give in to the mainstream. These types of clubs and promoters are directly contributing to the stagnation of artistry in the dance music arena in the US; in which case the proponents of the supposition that “the US is killing electronic music” may not be too far off, sadly enough. They are not the only antagonists, though. We as fans are doing our fair share (or lack thereof). The voices are so loud that condemn generic big room trap-infused drop sequences in comments strewn throughout the interwebz…but during live sets, those drops are the majority of times that people are losing their minds: WHY?! I don’t get it. Not only me, but what are the DJ’s/producers to take from that response? That big room is in, that they should be spinning it (and possibly producing it, too) to elicit crowd reaction and participation…in an effort to ultimately: grow their audience. 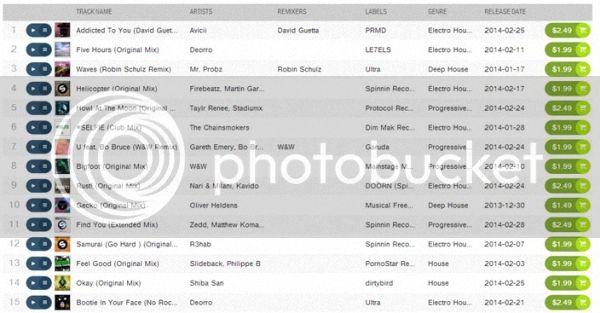 This is a problem so much greater than the sum of its parts. Each step incites another causal issue to form, and the most problematic to me is the stylistic identity crisis this whole process creates within our beloved producers themselves. What is a 10 year-long producer to think when a 15 year-old kid rises up from nowhere, releases some uber-simplistic, cheese-topped typical banger and grosses mass amounts of money, garners super crazy hype, and is one of the new stars in “EDM” – when said star has only been producing for maybe a year. (this is a fictional example not based on anyone in particular, just a thought experiment)

These symptoms have resulted in a few illnesses running rampant through electronic music as a whole. My hope it that through awareness and eventual action that we can halt any further perpetuation of the following outbreaks of GCHS (generic commercial house syndrome) and help to mitigate the stagnation of electronic dance music as a whole.

On the top of my personal irks list is when longtime producers completely abandon a signature sound crafted throughout the years in either original productions, remixes or (arguably the worst) in live sets. Yes, it is understood that evolutions of creativity and sound are par for the course…but there is no need to completely leave your established fan base in the dust that you have spent years cultivating and generating by focusing solely on big room house (or another hot-right-now production style). This may generate new fans, but it will most certainly alienate your existing ones and make others in the industry question your artistic vision. This is where I call out a couple producers (sorrynotsorry) directly for examples.

Firstly, Morgan Page. Been a fan of his for quite some time honestly, was a PODcast subscriber at one point, too. His Electric Zoo 2012 set: so creative! Flash forward to his 3D tour and insert original style verse updated with big room drop, airy original intro, generic trap-infused drop sequence…rinse, repeat…ad nauseum. I tweeted him, and received “Thanks for the support bro” and “It’s big festival energy with beautiful moments” tweets back. What a crock. Plus his PODcast isn’t differentiating him from the pack, he is just hiding himself in the mix of others in regards to track selection and (lack of) vision. There’s nothing wrong with even splitting your focus, much in the line that Tiesto has (arguably) been able to toe, but Page has seemingly just jumped ship from his prior stylistic base and audiences are left: confused.

One of the biggest DJ-led heartbreak moments of my live set lifespan came on The Groove Cruise, surprisingly enough. Following a night stacked with killer trance: Post Gabriel & Dresden and Cosmic Gate’s massive sets, George Acosta was slated to appear. Brimming with anticipation from listening to his prior productions, I was so ready for some atmospheric vibes, a perfect way to end the night: in space. Beyond geeked. Then, came that hard electro growl as one of the first notes that screamed from the rumbling sound system. I shot another author who was there with me (and had similar expectations of the forthcoming set) that “WTF is this?” drop face…and the rest of the set followed suit in generally unimaginative form (Note: I believe the aforementioned setlist is from his 2nd set on The Groove Cruise, but you get the gist). Nothing like his prior productions, heart broken. Just, why? Oh, that’s right…to increase your fan base and cash in on the trend. So sad.

So I feel urged to call these producer/DJ’s out that DJ a style completely different from your style in the studio or whom have completely abandoned an old sound with a solid fan base for commercial success. As fans, we understand experimentation with sounds within individual tracks or occasionally within sets themselves, but what we tend to find unforgivable is a complete change in production and DJ set style – in short, we (as long term fans) feel abandoned for the newer model when it doesn’t feel like a legit progression of sound.

Another live show pain that has been heard uttered many times is in regards to track selection throughout a DJ set. Logic seems to fall by the wayside, or maybe it’s too logical based on sales numbers. But, when the majority of fans come to see you as a DJ at a show, generally we want to hear *gasp* YOUR OWN TRACKS (both past, present and future) in addition to a mix of tracks that you like and fit the cohesion of your set and style; NOT the Beatport Top 20 chart.

Come on. Show us some creativity in your song selection, especially if you are performing on a side stage at a massive festival, or are doing a bus tour throughout the US. These types of situations are where the hardcore fans most likely populate, so why cater to the mainstream in these cases? Drop us some tracks that you produced back in 2009. A remix that you released in late 2010, followed by an upcoming release of a track that we may have only heard twice. Don’t feed us another mix of “Animals”. Additionally, every single “older track” does not need an updated tribal drop/breakdown – it just doesn’t! Talk about anticlimactic. Surprise us by dropping the original version once in a while. I think you will be surprised at the warm reception you will receive.

Daydreams Of Rewards via “Classics Sets”:

Again, understandably, this is not suggested for headlining sets at Ultra, however for more intimate sets and atmospheres. A growing audience of long time electronic music fans have expressed wishes of witnessing sets (or partial sets, even) put together in a prior DJ/production style in the artist’s musical past. Think Tritonal dropping an “Air Up There” set; their recent successes in the progressive house genre is legit and very strong (and by no means am I questioning their path), however a successful change in production/DJ styles does not mean that your hardcore fans wouldn’t love to hear an atmospheric set in the style of their previous “Air Up There” remix productions, or a classic Tiesto set (think “Elements Of Life”) or even a “Moscow” era themed W&W set (recent release of their older track “Ghost Town” gives me some hope). One suggestion if this path is taken: Heavily advertise the planned classics sets ahead of time, in order to allow traveling fans to come to you if the event is a rarer occurrence.

Within the festival environ, we understand the demographic niche – big room wins the largely uneducated masses. Set creativity is tough because so many sets are tied into the massive visual walls and light panels, so a script is needed. As far as main stage sets go, we also get it: massive light shows, throngs of “EDM fans” inquiring if Kaskade is Skrillex…a place where the generic drop gets the most insane reaction. A DJ caters to his audience, alright. But on a side stage (in which many seasoned fans post up at throughout multi-day festivals)…bring us some imagination! Shock us (in a good way).

If you are headlining your own tour: DO YOUR OWN THING. There is no reason to not showcase your body of production work in the past (again, original versions and older releases included). Sprinkle in some bangers if you need you need the energy upped, but please do not solely rely on them for the backbone and majority of your set – it just feels like a cop out.

A Call To Action:

This rant ends with a direct urging to all those revelers nodding their heads with my sentiments above. If you aren’t down with the style of a set, or the recurring theme of particular drop pattern: DON’T DANCE! As fans, the only power we have to send a message strongly is to disrupt the flow on the dancefloor. We hear so much criticism of cloned commercially-skewed formats online, but whenever overly simplistic generic big room-infused drops are inserted in various tracks in live atmospheres, I still witness masses of ragers going mental. Nothing changes until the masses start demanding it.

I say: Let’s Start A Revolution.

Rant To Be Continued With: Trance’s Identity Crisis

Disclaimer: Sentiments expressed throughout this thought piece is solely based upon personal perspective and does not represent EDMTunes as a whole nor any other author’s POV.