Tensnake feat. Nile Rodgers & Fiora – Love Sublime (Radio Edit)
Genre: House/Nu Disco | Label: Virgin EMI | Release Date: TBA
Tensnake has been building a name for himself through various releases throughout the past couple of years. The German producer earned his rep as one of house and disco’s leading new players after his track ‘Coma Cat’ smashed dancefloors across all continents in 2011. Fans are, however, still anxious and waiting for his debut album to be released. The date has since been set for March 10, 2014 when fans can expect the album, titled ‘Glow’, to be in stores. The first single ‘See Right Through’ was released earlier this year and reached number 5 on the Beatport charts. Now, the second single from the album has been premiered by Annie Mac on BBC Radio 1. The track features Nile Rodgers and singer Fiora, and is a dance friendly tune with an energetic disco-touch. In other words, very Tensnake-ish! Check it out below!
Tweet
Share
Pin
Share
0 Shares 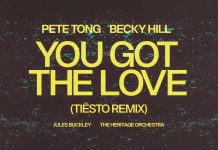