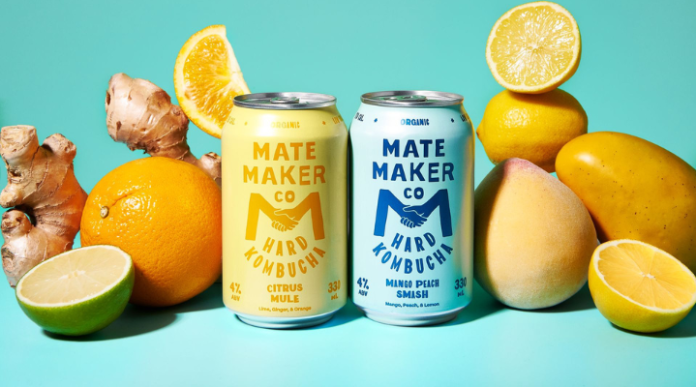 Now that RÜFÜS DU SOL have cleared up rumors about a dreaded breakup, they’re focusing their efforts on more important things – like the launch of their very own alcoholic kombucha.

The name of the new venture is Mate Maker Co. It is a boutique business founded by Justin Medcraft, ex-global senior brand manager at Diageo and brand director at Pabst Brewing Co, and co-founded by the the Grammy Award-winning trio as well as their manager, Danny Robson, and drinks trade expert, Tom Appleton (Diageo and Four Pillars Gin).

Mate Maker will hit the streets later this year starting with two ready-to-drink flavors: Mango Peach Smash and Citrus Mule Hard Kombucha. More flavors will be released soon. But in the meantime, these two will begin circulating at independent retailers and festivals across Australia by the end of this year.

According to Mate Maker, the fruity beverages are small-batch brewed and vegan, use no artificial sweeteners, colors, flavors or hidden ingredients, and are presented with sustainable packaging. They will also contain 4% alcohol by volume, less than 110 calories, and under five grams of sugar per can.

“When we discovered hard kombucha a couple years back in the U.S., we immediately thought people in Australia would get it. This is something we’ve put a lot of care and effort into and we’re stoked to be able to unveil it now right before we come home to play shows in Australia for the first time in three years. We think people will love it as much as we do.”

You can visit matemakerco.com for more info.