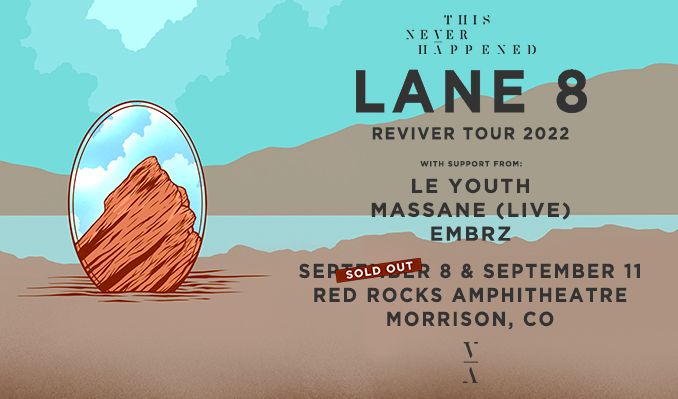 Last Thursday, September 8th and Sunday, September 11th, This Never Happened label boss, Lane 8 performed his second headlining series at Red Rocks Amphitheatre in Morrison, CO. I was lucky enough to attend Thursday’s show, and almost a week later, I am still in awe. I’ve seen Lane 8 several times, but a Red Rocks set was high on my bucket list. The combination of the gorgeous venue, perfect weather, and Lane 8’s energy made the night a memorable one.

Upon arrival at the show, attendees had to place their phones into a locked pouch that they could keep with them, but couldn’t open up until leaving. This is typical at all This Never Happened events, with the goal of having fans “experience the moment” without recording it. Such a small gesture had a big impact on the event, as fans could be seen dancing, smiling, and enjoying the show without a phone in sight.

Openers included This Never Happened label mainstays EMBRZ, Massane, and Le Youth, who all delivered impeccable sets to properly set the tone for the headlining performance. Lane 8 took the stage promptly at 8:30 and played a three-hour set, which included one encore.

Fans were blessed with several ID’s that have appeared in recent Lane 8 mixtapes, numerous edits of popular tracks like ‘Stir Me Up‘ and ‘Brightest Lights,’ and of course classic tracks like ‘No Captain‘ and ‘Daya.’ Of course, since the set was part of the Reviver tour, we also got several songs from the new album including ‘Survive,’ ‘Watermelon Wormhole,’ and ‘Nuclear Lethargy.’

One of my favorite moments of the night was ‘And We Knew It Was Our Time,’ as this song just begs to be played live. Both Lane 8 and the crowd’s energy came together for a magical tear-inducing moment. Another favorite for me was ‘Watermelon Wormhole‘ from Reviver, a song I had perhaps overlooked before. This song, combined with the chosen visuals, took me on a journey I’ll never forget.

While this weekend has already come to an end, we’re keeping our fingers crossed for another Red Rocks performance next year. Stay tuned, because that’s something you won’t want to miss!