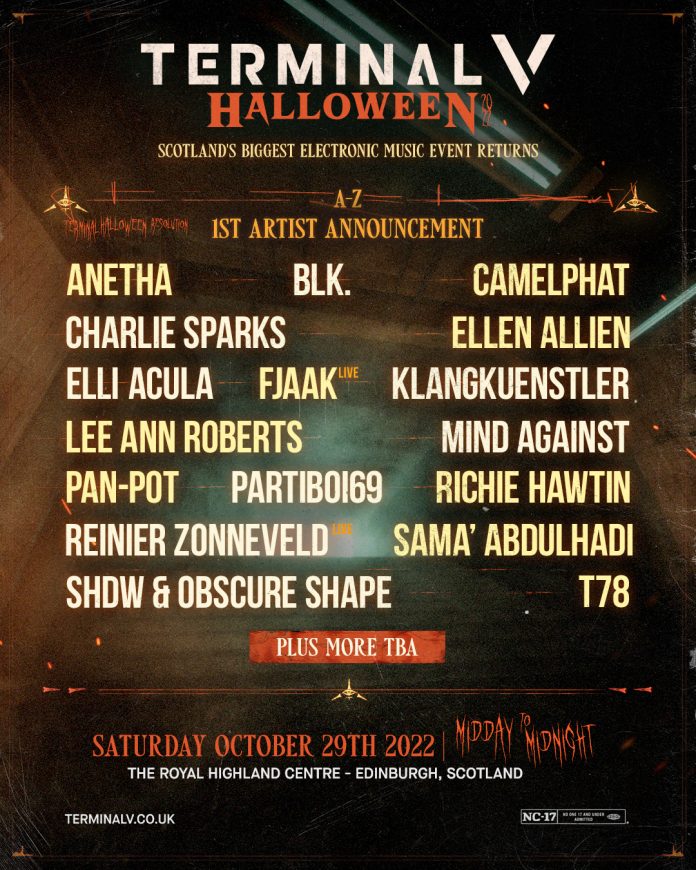 Terminal V has shown us time and time again that they are one of the most successful festivals in today’s scene. Now, the iconic festival is ready to take on one of the best dates of the year. This year, Terminal V will bring the nastiest beats into the spookiest date of the year: Halloween! Such an event surely deserves a masterfully curated lineup, and so last week brought us the announcement for the first wave of artists of Terminal V: Halloween edition!

The own festival description goes as follows:

“Terminal V Halloween is undoubtedly a notable date in the annual global party calendar. It has an international reputation for its mind-blowing production and all-around immersive festival experience. That’s why thousands of party people now flock to it from all over the UK and Europe, keen to experience one of techno’s most mesmeric and spine-tingling parties. One of the few UK festivals which runs not once but twice per year, the Halloween edition is a strictly indoor affair, utilizing the vast internal space of the Royal Highland Centre running for 1 day only, midday to midnight.”

Amongst some of the biggest names performing announced in the first wave for the lineup of Terminal V – Halloween’s edition you can find:

Just to name a few. Quite a lineup, don’t you think? Doses of house, doses of techno, live acts. Everything you could ask for. And this is just the first wave. Certainly, a huge success for Terminal V.

So, are you ready to join one of the craziest parties in Scotland? Registration’s now open on
Make sure to join what will surely be a very successful Halloween debut edition for Terminal V! See you in October, Edinburgh!