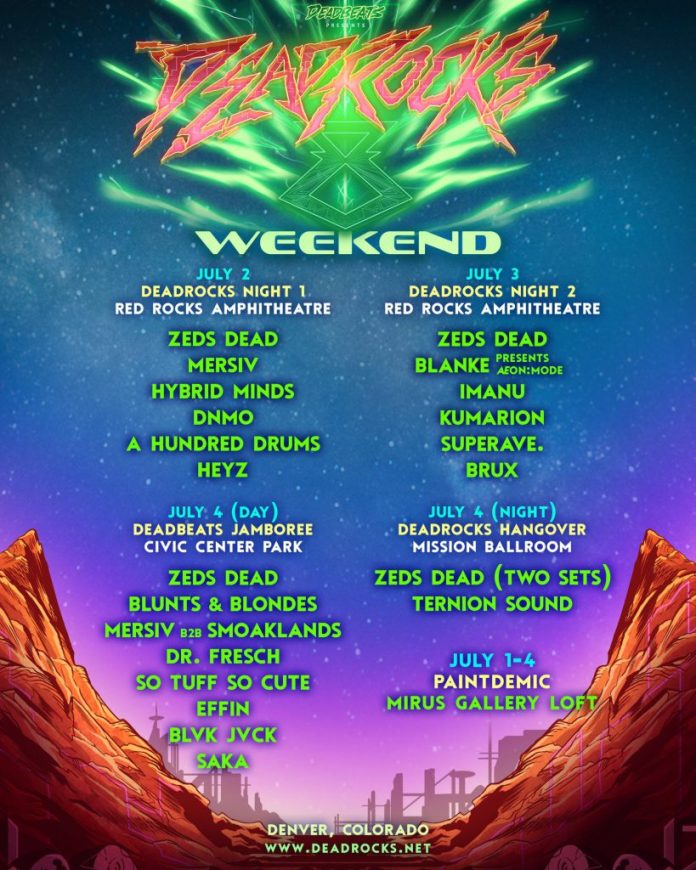 Unfortunately for Zeds Dead fans all over the country, another Deadrocks weekend has officially come to an end. This year’s event, the eighth installment of the annual Zeds Dead curated music festival, took place July 2nd and 3rd at the iconic Red Rocks Amphitheatre in Denver, Colorado.

Night one openers included Heyz, A Hundred Drums, DNMO, Hybrid Minds, and Mersiv. Then the boys took stage for what would turn out to be an epic two-hour set. With fan favorites like ‘Gassed Up’, ‘Blame,’ and ‘Lift You Up,’ as well as ZD classics like their remix of Bon Iver’s ‘Woods‘, ‘Journey Of a Lifetime,’ and ‘White Satin‘, the Canadian duo covered multiple genres spanning over a decade of their discography.

As expected, night two somehow still exceeded all expectations. Following opening sets from BRUX, SuperAve., Kumarion, IMANU, and Blanke (AEON: MODE), Zeds Dead took us on another two-hour journey though bass, house, DnB, and more. After opening with the highly anticipated Subtronics & Zeds Dead ID, the boys gave us ‘Alive,’ ‘Symphony,’ ‘Where The Wild Things Are,’ ‘Gimme Shelter,’ ‘Collapse,’ ‘Go Deep,’ ‘No Prayers,’ ‘Shut Up & Sing,’ ‘Touch,’ and so many more.

Standout moments from the weekend include a DnB Remix of Dick Dale’s ‘Misirlou,’ the iconic track from Pulp Fiction, and some brand new edits of classic tracks like the Zombies’ ‘Time of the Season’ and Beethoven’s ‘Fur Elise.’ There is nothing these two can’t do.

For fans wanting more at the close of Deadrocks, they had several more Zeds Dead sets to choose from on July 4th: the second annual Deadbeats Jamboree at Civic Center Park, followed by Deadbeats Hangover at Mission Ballroom, featuring not one, but TWO sets from Zeds Dead.

Although the best weekend of the year has come and gone, I’ll be reliving these moments for months to come. Until next year Deadrocks.